The Wandering Inn Wiki
Register
Don't have an account?
Sign In
Advertisement
in: Locations, Monsters, Chandrar,
and 5 more

A’ctelios Salash is one of the four Shield Kingdoms of Chandrar. A'ctelious Salash is known by many names: Carven City, Tombhome, or simply A'ctelios. A'ctelios Salash is famously known as the city that has never fallen, even during the time when Dragons ruled, as well as for its [Formshapers]. It is considered a 'creepy' place, even by Selphid standards.[1]

A’ctelios Salash is a city in south-western Chandrar. Owing to the gargantuan size of the continent, it took three days of near-constant flight via magical carpet to reach A'ctelios from Germina.

A'ctelios Salash is the corpse of a Seamwalker[2], an ancient, eldritch monster that came from the edge of the world. At some point, it ventured into Chandrar and was subsequently slain; its killers were considered heroes, and subsequently began hollowing out its corpse and began living inside of it.

The denizens of A'ctelios harvest the flesh of their home and eat it. Currently, all five of its eyes, brain and parts of its upper body have been hollowed out and are inhabited by its citizens. The flesh never rots, as it is "made of magic and time",[3] and is compared to Dragonflesh, which has the same qualities.

The natives of A'ctelios receive a unique boon from eating the flesh of their home, in the form of the suffix [Fleshchosen] to their class, for example Sainath, a [Fleshchosen Formshaper]. An example of such a boon is an extended lifespan.

“In an age before the Dragons ruled, something came from beyond the edge of the world. It must have destroyed nations. But here it fell. And A’ctelios Salash was the nation that sprang from its corpse. Even when Dragons ruled, they did not take this place. And the people of A’ctelios first sheltered in its eyes. Then, over millennia, dug deeper.” The Quarass

Trey recognized the corpse from the air instantly as something that is commonly known on Earth, but the Quarass reassured him that this type of monster can be encountered near the Edge of the World, where she has seen other specimens and that the Drathians hunt them: “This one was simply the largest.”[3]

“I met a traveller walking on a journey

We stopped where shadows met the sand,

He entered the tomb rotting and I held back

I saw him ever waving, but I never took his hand.”

“We met two folk who stopped on a lonesome path

One entered full of willing, the other did not stay,

A single soul found comfort in our ancient home

He is one of many, and the other slipped away.”

A'ctelios Salash has a vast trading area and traders can enter freely, which makes the city rich. But traders do not stray far or travel below the first layer, due to the city's reputation. Visitors to the city are told not to eat their rotless meat, and the residents are meant to warn them of the risks if they choose to eat it.

They sell meat, leather, and bone. Visiting traders that sell food specify that it's from the outside. Meat from A'ctelios is sold at four coppers for a thick cut, the same price for a Yellat in Reim.

They also offer services. Their [Formshapers], also called [Flesh Mages] and [Fleshshapers], can warp flesh, work with living tissue just as [Necromancers] work with dead tissue. This lets them heal all physical maladies, and they can be hired for this service. They fix birth conditions for the residents.[3]

They use Pakheil as beasts of burden. Pakeil are huge beasts that use to be people, warped residents of the city just like the [Fleshchosen]. Becoming a Pakheil is a gamble from eating the meat of A'ctelios, and outsiders become Pahkeil more often than natives. It is not supposed to be guaranteed that one would be turned into a Pakheil, and they're meant to be respected. This was no longer the case when Trey came to Tombhome.[4]

A'ctelios Salash is a Shield Kingdom, one of the most ancient nations in the world and tasked with defending Chandrar from Dragons, because they had once killed something worse and now live in its corpse. Eating the meat of the city makes them much more resilient, and lets them change their bodies, making weapons from their flesh. They are stronger inside their home, able to heal from deep wounds in moments.[3]

The city's narrow passages prevents enemy armies from breaking in. A million soldiers could break upon A'ctelios Salash.[5] While it does not have a Watch, but does still have designated peacekeepers, outfited in bone armor and wielding bone weapons.[3]

A’ctelios supports the Blighted Kingdom with its personnel and flesh so that Rhir's Flesh Reapers can develop the ability to safely consume Demon flesh: They lose their humanity, become extremely tough and more Demon-like in order to fight their Enemy.[6]

Their exists further levels of transformation currently unknown, which are resistant to spells. As well as other monsters deeper within, which the Scourgeriders could barely kill.[5]

The residents of A'ctelios Salash need to eat the meat of the city regularly. Thus, residents abroad need to have some sent to them, or periodically return in order to get more.

They are vulnerable to diseases. It is the one thing they fear.[5]

During Flos' conquests, he vassalized A'ctelios Salash in a single day and moved on, deciding the city had nothing he wanted.

Trey, Gazi and the Quarass visited A'ctelios Salash in order to heal Gazi's central eye. Afterwards, Trey realises one of the Pakeil was a former Earther, and a video recording showed that he and his group were tricked into consuming the flesh of the city, not given a choice. As the Carven City had betrayed its agreement, they fought their way out. Once outside, they saw that the city's eyes had moved and where looking at them.

The thousands of Seamwalkers summoned to Kasignel by Norechl, and later the appearance of the Timewalker, was making A'ctelios Salash active again, as it could sense its kin. Fetohep awakened the Scourgeriders of Emrist and rang the Dragonbell to alert everyone of the danger. The Scourgeriders escorted a vessel of poison from Germina carried by Djinnis from Merreid. Once inside, they found that the layout had changed and the spot to deliver the poison could not be found. They thus had to deliver it to a heart or major artery. Every Scourgerider perished to the unknown horrors within the Carven City, but successfully rendered it dormant again. They discovered is a strange room deep within, built tens of thousands of years ago.[5] 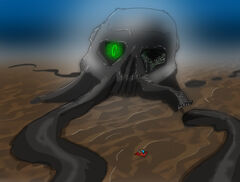 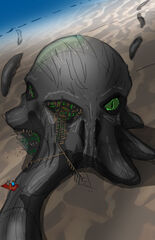 A'ctelios from high up, by mg 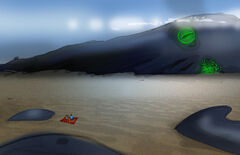 A'ctelios from afar, by mg 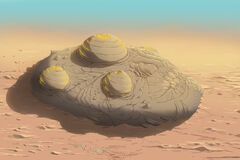 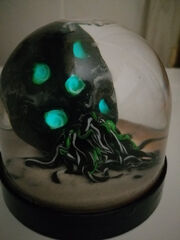 A'ctelios in a jar (Project Description), by Mr Momo