The Wandering Inn Wiki
Register
Don't have an account?
Sign In
Advertisement
in: Characters, Humans, Fist Fighters,
and 3 more

Interlude - 5
Alber is a Human [Boxer] who has a passion for fist fights. He moves from city to city, and earns money by challenging anyone to try and knock him down or last three minutes in the ring.

Due to his ears and nose having both taken a lot of impacts, he has developed a boxer’s face. He has the body of a featherweight class fighter.[1]

Alber is a stoic person who takes most things in stride. He has a habit of mentally assigning people nicknames based on their most prominent characteristic (Ryoka: "Braggart," Fierre: "Cougher," Medain: "Madman").[2] However, he is slightly more friendlier when he gets to know someone better.

TBA From Interlude – Dancing and Brawling 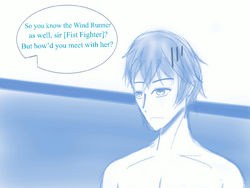