Amentus is the name of a tree species that grows in the Floodplains of Liscor as well as on some other places of the world. It grows blue fruits with a thick layer of sweet, edible flesh on a hard, highly poisonous core in the center. These fruits can be harvested from late spring to late autumn.

Amentus trees are roughly 10 feet tall and have a thin, spindly trunk which looks as if it can't support the treetop. Its pale grey wood is very hard and dense and even thinner branches flex only little. The large green leaves that grow on the branches give the tree an air of a palm tree.[1][2]

The round fruits grow in clusters on the branches; the smaller and unripe ones have a yellow color. (Contradiction: Unripe Amentus fruit are wrinkly and have a black color.[2]) The ripe ones are about three times larger than apples (probably about the size of large mangos?) and are covered in a hairy and rubbery skin that is edible but can be peeled off. The layer of fruit flesh below is purple-blue and has a sweet taste. A sweet blue fruit juice can be gathered from this outer rind.[1]

Two thirds of the fruit however make up the seed core: A shell with a purple-brownish hue, that can be cracked open and reveals pulpy seeds suspended in a brown nutrient solution. It's this unappetizing nutrient solution that is poisonous and stinks like a chemical product, akin to antifreeze or a cleaning product.[1] Swallowing even tiny amounts of the poison induces nausea.[3] Larger amounts cause painful death within hours, according to Pisces.[4] According to Ceria, Amentus seed liquid is a contact poison that can even make people sick by touching it.[5] Animals and even monsters like Rock Crabs avoid the stuff for this reason, trying to clean themselves off the fluid as soon as possible.[1] This makes them an effective deterrent against the aggressive monsters around Liscor.

Both fruits and leaves fall off the tree in winter, leaving only the thin trunk and branches behind.[6]

Erin, stranded at the Wandering Inn, found a veritable grove of Amentus trees in a Floodplains valley walking distance of the first Wandering Inn. She harvested the fruits by kicking trees and collecting the ripe fruits that went down. She also found that Goblins similarly harvested the trees for the fruits.[1]

Erin dubbed the Amentus blue fruit and served its juice as one of the first items on her menu, demanding 2 coppers per glass. She experienced that blue fruits became rubbery when not fresh, and had to be thrown away.

In the winter, Toren tried to fell an Amentus tree, but was unable to even cut through the bark, only leaving a few scratches.[6] In early spring, the Amentus grove was completely submerged in its valley, but thrived and could even produce its first blue fruits shortly after the floods drained away. Erin promptly set up a magical doorway to the grove from her new inn and harvesting fruits became one of the morning tasks that were delegated to Numbtongue.[2]

Lyonette changed the price to 6 coppers once the blue fruit juice was back in season again in spring; and 2 additional coppers would buy a mixed beverage with gin[2]or rum.[7] 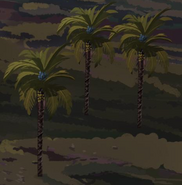