The Wandering Inn Wiki
Register
Don't have an account?
Sign In
Advertisement
in: Characters, Humans, Mages,
and 3 more

S03 - Wistram Days (Pt. 1)
Chapter 6.68 (Officially)
Amerys,also known as the Calm Flower of the Battlefield, is one of the King of Destruction’s Seven and one of the Archmages of Wistram.

As a Chandrarian native, she has dark skin,[1] leaf-green hair, and bright, yellow eyes, like lightning itself.[2]

She wear a robes with a brilliant cloud pattern of a sky-blue and silver like clouds, mixed with red, the color of Flos’ hair.[3]

Amerys's nickname "The Calm Flower" belies her fierce and intense nature, especially on the battlefield. Despite her abilities as a war-mage, she has a scholarly side, sometimes taking notes to record her thoughts.[4] She has an unwavering respect and dedication for Flos, evident when she endured captivity in Wistram for nearly a year for refusing to renounce him.

A decade ago, when Flos launched his invasion from Chandrar, he sent Amerys with the fleets, sailing to Izril. There they confronted Zeres, and while she was able to lock down the Walled City practically by herself, they were not able to make it past it.[5] 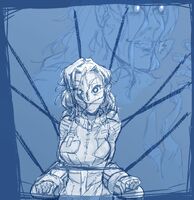 Four of the Seven, by mg 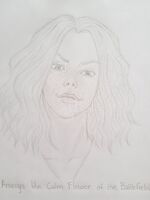