Amerys, also known as Amerys the Calm Flower, is one of the King of Destruction’s Seven.

A decade ago, when Flos launched his invasion from Chandrar, he sent Amerys with the fleets, sailing to Izril. There they confronted Zeres, and while she was able to lock down the Walled City practically by herself, they were not able to make it past it.[1] 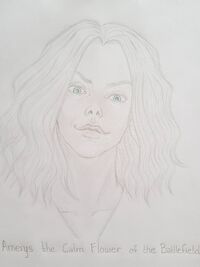 Retrieved from "https://thewanderinginn.fandom.com/wiki/Amerys?oldid=29095"
Community content is available under CC-BY-SA unless otherwise noted.