Antinium, also known as The Black Tide and The invaders from Rhir, are a race of strange ant-people that had invaded Izril years ago and fought in two bloody wars known as the First and Second Antinium Wars. They live in Hives underground and mainly come in two varieties, Workers and Soldiers. More specialized versions exist, but they vary from Hive to Hive. Each Hive has its Queen and own personality, but the Antinium are united in one goal: to return home.

Their size varies greatly, though depending which duty each has. For example, a soldier is much taller, and wider than a worker. Their blood is green.[1]

They have dark brown chitinous body with a huge abdomen, bipedal legs, four arms, two feelers on top of their heads, two long pincers coming out of there mouth and black bulbous eyes which are multi-faceted like those of an insect. Their shells are as tough as any leather armor.

These Antinium are nearly twice the size of Workers, with massive forearms and spiked, sharp gauntlets formed of their exoskeleton.[2]

Antinium Soldiers fight hand-to-hand and charge into pikes and magical traps without regard for their lives. They can continue to attack even when mortally wounded, and they are capable of bludgeoning even the most well-armored warrior to death given time. They are not affected by Crelers toxins.[3]

All Antinium connected to the same hive can share memories and thought process, enabling telepathic communication.

The 1st Grand Queen was said to have lived for several centuries, although it is not known whether she naturally lived that long or if she had to undergo the Rite of Anastases.[4] If Grand Queens live as long as Queens, then it is more likely that the 1st Grand Queen was forced to make use of the Rite. Before the Queen of the Free Antinium left Rhir, which means a bit over 20 years ago, she was considered "young, a new Queen, barely more than a child".[5] And, yet, Klbkch wondered only after around 2 decades if it is time for her to go through the Rite, as she is "certainly old". This shows that the Queens have even shorter lifespans than Humans.[6]

As for the Workers, one can make a rough estimation based on Pawn's statements. He said to have been "created long after those wars", which refers to the 2 Antinium Wars. The last one happened only 12 years ago, though it hasn't yet been revealed when it ended.[7] Furthermore, he also said that he "lived more than half of the average Worker’s lifespan".[8] This would mean that if one were to say that he had been created around 9 years ago, his total lifespan would probably at most be around 17 years. Although, when he was talking about the average Worker's lifespan, he might have not been referring to how long they naturallly live but their short life expectancy that is the result of being often used as soldiers in the dungeon. It is confirmed that their lifespan is at the very least above 13 years, and that it is around that age that they start to deteriorate in quality due to old age.[9]

While it is not known how long exactly the Workers live, it is known that when they grow old, they will become slower, to the point that they would be given jobs fitting their station. As they keep aging, they will reach the point were they would be too slow and too weary, until they curl up and stop breathing.[10]

The Antinium's diet is varied, but primarily consists of meat and other products that are ground into a nutritious but incredibly bland paste. They can also digest most dishes eaten by humanoids, but all Antinium made biased on Galuc’s form[11] are all naturally gluten-intolerant, making bread, pasta and similar dishes difficult to process as it makes them lethargic and does nasty things to their digestion.[12] A weak magical charm against food poisoning has been shown to be successful in allowing them to consume these products without issue.[13]

Despite the variety of foods that are available to them, the Antinium in Liscor's hive have shown a preference for different forms of bugs. This includes both Acid Flies and Ashfire Bees to date. Though these bugs do not meet their nutritional requirements, they are tasty.

The Antinium do not lie down to sleep. It’s not that they can’t, but their backs do not curve like mammals, but resemble more beetle’s in many ways, like the rocking that occurs when they lie down, which is not desired. Thus, both Workers and Soldiers alike sleep while sitting. The Workers of Liscor's hive, have huge barrack-like sleeping area that held five hundred Workers, where they can rest for around six hours.[14]

It is possible for the Queens to revive a deceased Antinium by doing a ritual called Rite of Anastases, but it very rarely is done, as this ritual costs a lot of resources and time (three weeks without rest), therefore the Queens would only consider a Prognugator or another Queen worthy of the effort and time required. Once the Antinium is revived, it loses ten levels among its classes.[15] However, the rite isn't solely used to revive deceased Antinium, but also to rejuvenate Queens that have reached a too advanced age.[16]

The Antinium have safeguards to fight off hostile enchantments and illusions built into their very nature when they were created. One of those protections was an innate resistance to mental trickery. So, while a part of them was functionally under the effect of enchantment, the other part could still think and fight back, trying to seize control of their body back. It was an effective bit of mental conditioning that made the Antinium so effective in battle. The safeguards don't work in regards to Aberrations. As strong as the safeguards are, they still have their limits as they don't work in regards to Aberrations and should an Antinium be subjected to the effect of strong enchantments (like true [Insanity]), they would become an Aberration at once.[17]

The Antinium cannot swim. They are unable to float, and despite being able to hold their breath for an extended duration, they perish of suffocation like any other species.[18]

Antinium have neither arteries, nor a closed circulatory system. As such when they sustain massive hemorrhage, it was impossible to close a vein or stem the bleeding. Only intensive treatment can save them at that point.[19]

As a necessity all Antinium that are recreation and modification of Galuc’s form suffer from chemical imbalances, such as gluten-intolerance. However such imperfections do not extend to Queens[11] and Antinium not-biased on Galuc.

Years ago the Antinium left Rhir to invade the southern area of Izril. This incursion led to the bloody year-long war known as, the First Incursion War or the First Antinium War, in which hundreds of thousands of Antinium soldiers established huge colonies across the southern plains, razing cities and forcing Gnoll tribes to retreat into the lower plain regions.
Initially, the northern cities and allied confederacies were slow to react to the Antinium sweeping through the plateaus and rugged mountainous regions of the continent, underestimating the dangers of an entrenched Antinium hive and the true numbers of the Antinium concealed beneath the earth. It was only after five cities were lost that they decided to act.

The tide of the war only changed after the discovery of the Antinium’s fatal weakness. Using their newfound tactics, the Southern Alliance used long-range mage spells to assault Antinium hives and deter attacking forces. Several hives were destroyed entirely before a temporary truce was formed between the Antinium Queens and the Collective and the leaders of the city-states. This peace was tenuous however and lasted for only eight years when the Antinium attacked again, leading to the Second Incursion War.[20]

There are currently six[21] known Antinium hives in the world, and all are located in Izril. All five of them are being under the authority of the Grand Queen. One of the laws she set was that the queens of each colony, are prohibited to bear queens of their own.

They have a strict caste system, therefore every member of the hive has a single task to fulfill —a warrior is to defend the hive, a worker to construct, and so on. Another noticeable feature of the race is the lack of self-consciousness. Every Antinium, except for selected few, such as the queen, and the Prognugator, appears almost machine-like. The only thing they live for is to simply fulfill the task that was given to them. There have been few, who managed to achieve self-consciousness, called Aberrations or Individuals.

Once an Antinium has become an Aberration it becomes immensely aggressive and tries to kill everything it sees. As a result of that, once someone has been identified to be one, they are immediately killed. Individuals, on the other hand, show no such negative behaviors, and as a result of that are very desired by the hive, though the success rate of an Antinium becoming one is extremely low. Only the Queen of the Free Antinium is still trying to create Individuals, as the other ones think it to be pointless and only leads to a waste of resources.

The Centenium had been the ageless champions of the Antinium. While it appears that the knowledge to create them had been lost, it is said that the Antinium sacrificed a million lives for the first Centenium.[22]

They were made long ago. For one purpose. The Grand Queen made many Antinium in many shapes to serve every role imaginable, but one hundred of them she labored upon, gave individuality to, gave names and strength beyond the rest. They were not made to be spent and replaced like the other Antinium. The Centenium were made to be one thing and one thing alone: to be heroes.[23]

Currently, only 3 Centenium are still alive.[24] While it is not known what exactly the original task of the Centenium was, it was said that it relates directly to Gods.[25]

The Six Known Hives in Izril 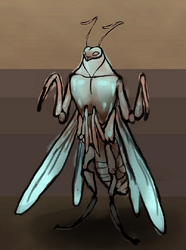 Retrieved from "https://thewanderinginn.fandom.com/wiki/Antinium?oldid=23945"
Community content is available under CC-BY-SA unless otherwise noted.