The Wandering Inn Wiki
Register
Don't have an account?
Sign In
Advertisement
in: Characters, Izril, Ashfire Bees,
and 4 more

Apista is a little bit bigger than the size of two hands joined together, which makes her larger than the average Ashfire Bee which are as big as a hand.[1]

Having drunk the magical nectar of the faerie flowers on a regular basis, Apista's mana reserves have increased, allowing her to create hotter, brighter flames which also won't extinguish as quickly compared to other ashfire bees.[1] 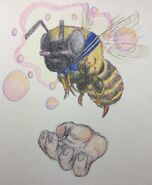