Belavierr, the Stitch Witch, is a powerful witch and Wiskeria's foster mother.

Belavierr is tall, taller even than Ryoka, and has long hair. Her eyes are filled with multiple orange glowing irises, each one smaller and smaller, disappearing into the center of her eyes.

She wears a pointed hat wide enough to cast her entire body into shade. It is dark blue as the depths of the ocean. Her body is covered with a very dark ornamented robe that is long and draping. She has black wrapping around her hands, making only the skin on her face visible.

She speaks in a deep, quiet voice with a subtle echo to it.

Her face shows no expression, and when she does try, like smiling slightly due to seeing her daughter, it comes across as awkward, and then quickly vanishes.[1]

While she keeps being polite, she doesn't seem to be interested in other people. Even when she sees the ground filled with dead people, she is completely unfazed by it, as though they are no different than leaves. [1]

Despite the fact that it has yet to be revealed how powerful she is, Ryoka noticed how similar the feeling she got from her was to being in the presence of Ivolethe, Teriarch or Az'kerash, something beyond human, implying her to be anything but weak.[1]

The shadows move slowly around her. 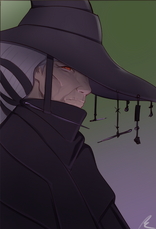 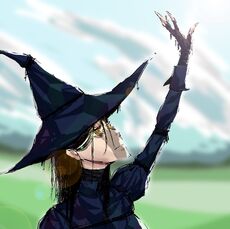 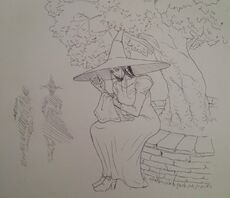 Belavierr with Ryoka and Wiskeria in the background. By DemonicCriminal 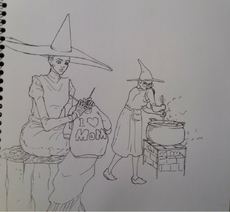 Retrieved from "https://thewanderinginn.fandom.com/wiki/Belavierr?oldid=31563"
Community content is available under CC-BY-SA unless otherwise noted.