The Wandering Inn Wiki
Register
Don't have an account?
Sign In
in: Characters, Garudas, Izril,
and 4 more

Bevussa Slenderscale is a Garuda and the secret leader of the Gold-rank team The Wings of Pallass that consists, aside from her, of winged Oldblood Drakes. Despite being actually the captain of the group, Bevussa keeps this to herself and makes one of her team members pose as the leader.

Being a Garuda, Bevussa has a beak instead of a mouth. Her body is covered with spring green feathers with white and slightly pink ones patterning down her limbs. Similar to Gnolls, she only wears few clothes, just enough for modesty.[1] 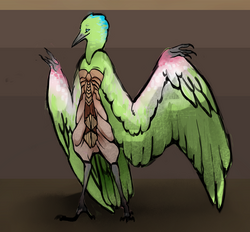