The Wandering Inn Wiki
Register
Don't have an account?
Sign In
Advertisement
in: Locations, Areas, Izril,
and 2 more

The Bloodfields is the name of a Death Zone located in Izril.

The Bloodfields is an area not far from Liscor that is the home of many dangers. While the area can be considered mostly harmless in late autumn and winter, it blooms in spring and is a Gold-rank threat over the whole summer.

It is a battlefield which transformed the whole landscape, due to the massive amount of blood that has been spilled there due to the Humans and Drakes annual wars.

As a result of that, Blood Grass has started growing there, drinking blood and eating people, if they are not careful.[1]

It is known that [The Bloodless Lands Open—] (Name Incomplete) is the [Grand Ritual] Spell that had initially made the Bloodfields.[2]

When Ryoka ran past Liscor to find Az'kerash in the Bloodfields, on the third day she ascended an elevation that can be understood to be the southern border of the flood plains. On the fourth day, she encountered the first curiously red plants, and the blood fields: The Blood Grass covers a vast, flat plains that is wholly red.

Some close edges of the Bloodfields to Liscor are approximately 90 miles south of the city.[3]

The city of Liscor funded a new road from Liscor to the South of Izril in the summer after Erin's arrival. After some exploration, the route was built east of the Bloodfields, with a good security distance between the Bloodfields and the road.[4] This road was finished in Volume 7.

The Drake cities that are closest to Liscor along this south route are the cities of the Hectval-Drisshia-Luldem Alliance[5], also the city of Lyszen (a hotspot for adventurers)[6] and the village of Sasil from where Liscor imports most of its vegetables.[7]

The Bloodfields are one of few places were the dead do not seem to rise or where they disappear.[8] This has probably to do with the fact that they are consumed and their Mana is flowing to the plants and creatures of the Bloodfields instead of remaining in the corpses. 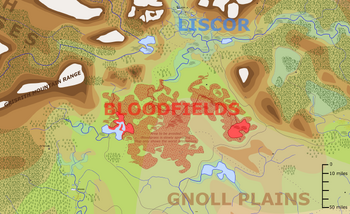 Bloodfields and surrounding area in a map (not canon, Artist's rendition)