Chapter 1.02 R
Calruz was the leader of the silver-rank adventurer group, the Horns of Hammerad.

He was presumed dead in the battle against Skinner, but had in fact survived and become the chieftain of the Raskghar of Liscor's Dungeon.[1]

He is estimated to be about six foot seven, without even counting the horns,[2] making him fairly tall for a Minotaur[3] and weights 300 pounds.[4]

Calruz's body can be rather expressive. His long tufted ears go still when he is surprised [5] and his blue eyes might turn red once he gets enraged.[2]

Only his left arm remains, having lost the other arm, the dominant one, during the fight against Skinner.[6] He has short, dark brown fur, and, after he spent months in Liscor's dungeon, yellow teeth.[7]

Calruz is a very straightforward person. He speaks what is on his mind, whether it is tactful or not in that situation. He is guided by his own principles of honor in all aspects of his life.

Also, Calruz was an adventurer in the core of his personality, who would never quit adventuring.[8]

He founded the Horns of Hammerad and recruited all of them. He was also responsible for their combat motto: Death before Dishonor.

His group successfully raided the Ruins of Albez and fought a Lich. He was very thankfully towards Ryoka Griffin who had assisted them by delivering potions. So much so, that his group went to Liscor to get Ryoka cured from her leg injury.[9] He then assembled several teams of silver-ranked adventurer captains like himself, and urged them to a joint expeditions in the Ruins of Liscor.

Before that mission though, he was challenged by Ryoka to a duel, where she insulted him. He only realized then that she had no levels. While he was disappointed and dismissive of her then,[10] he still admired her bravado and considered her a warrior in spirit. When Calruz taught Erin some basic fighting skills, he was still thinking about Ryoka and how he would make her accept leveling.[4]

After Skinner's Attack on Liscor, it was presumed that Calruz was dead. However, Olesm realized that his bones were never discovered by the Watch after the attack concluded. During an excursion with Pisces, the two realized that there was the possibility that Calruz escaped through the 5th hidden entrance into Liscor's Dungeon.[11]

It is later revealed that Calruz did survive the fall into the dungeon. However, he appears to have gone mentally insane, either as a result of being in the dungeon, drinking the dungeon's water, or simply by suffering excruciating loss. As a result, he meets and challenges Raskghar in the dungeon, becoming their Chieftain. He is the primary antagonist during the events of the Raskghar Attack on Liscor, eventually being defeated and captured.

He has since been held in the strongest cell in Liscor's prison. 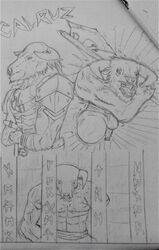 Never Forget the Honor, by Chalyon

Retrieved from "https://thewanderinginn.fandom.com/wiki/Calruz?oldid=30502"
Community content is available under CC-BY-SA unless otherwise noted.