Oversee Wistram and its mages

S03 – Wistram Days (Pt. 1)
Cognita is a Carved Golem, or rather a Truestone Construct, designed to oversee Wistram Academy and its mages.

Cognita is an eight feet tall golem whose body, consisting of grey stone, has been carved to make her look like an inhumanly perfect woman[1] with a white porcelain face.[2]

When she moves, which she does as gracefully as a dancer,[3] her robes, made of rock as well, ripple, making them appear to be nothing but cloth.[4]

Despite the fact that she consists of stone, it makes the impression that she is a living person made of flesh. Cognita's emerald eyes can blink[2] and her face, while usually impassive, can change, for instance into a smile.[5]

Pisces stated that Cognita is ironically a bad liar, as golems are in general.

Opposed to many people's belief, Cognita can feel passion. Pisces noticed that when he told her of his ambitions, of what might be done with magic that had never been attempted before.[6]

Cognita was created by the Drake Archmage Zelkyr and is his greatest creation.

She walked Pallass’ walls and fought against the Five Families during one of their invasions of Southern Izril. She helped crush the foothold they established on Pallassian ores and killed two other Archmages in battle herself.[7]

She can punch straight through a wall of enchanted ice with ease. 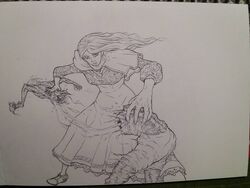 Retrieved from "https://thewanderinginn.fandom.com/wiki/Cognita?oldid=31697"
Community content is available under CC-BY-SA unless otherwise noted.