The Wandering Inn Wiki
Register
Don't have an account?
Sign In
Advertisement
in: Characters, Humans, Pakeil,
and 4 more

Davi was an Earther from Portugal, Europe, that was teleported to Innworld. He initially arrived with 18 other Earthers in Chandrar, in the middle of nowhere, but upon finding the city of A’ctelios Salash, he and 14 others went inside the city, and got tricked into eating enough A'ctelios meat to change into Pakeils. 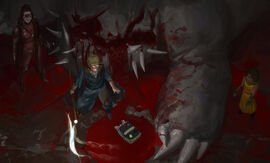