The Dead Gods are entities that everyone on Innworld believes dead, yet many people know multiple gods existed a long time ago.

There are six primary Dead Gods, who attempted to form pacts with people from Earth, who gained power at the Summer Solstice, from Emerrhain's manipulation of Aaron:

Multiple Lesser Dead Gods that are so weak that their form has been lost and their minds fragmented. While weaker then The Six, they are still dangerous as they too want to improve from their desperate fate.

People in Innworld know that the gods are dead, and have been so for tens of thousands of years. As such, they no longer pray to gods, but the exclamation "Dead Gods!" is a common expression of disbelief or surprise among many Innworlders. The first recorded exclamation within the story was uttered by Zevara.[1] Pisces and Ceria often swear that way as well.[2]

Pisces educated Erin about the gods being extinct: “Miracles were a function of faith and belief in gods. And the gods no longer exist.” [...] “The gods are dead. So too are the ancient ways of faith and miracle.”[3] The people of the Blighted Kingdom are also aware that the Gods are dead, as they told Tom.[4]

Ryoka did research on the gods in Magnolia's library and found no reference to any god by name - Not one, in over ten thousand years of history, as far as I can tell. [... ] Oh, there are hints — references to someone trying to bring back the [Cleric] class, a faded relic here and there, but no gods are ever referenced directly. They’re dead.[5]

The Six appeared to Earthers on the Winter Solstice, most notably Erin Solstice and Ryoka Griffin.

Tamaroth, Emerrhain, and Laedonius Deviy appeared in Erin Solstice's inn on the Winter's Solstice. Erin emptied her food storages to serve them, and Tamaroth made allusions to others who couldn't make it to the inn: “They are lost as we are, but do not fear. We will meet again in time. That is a certainty, and they do not fear the storm.” [...] “Do not worry. They will come in time. As for names… it would be pointless to ask. Few remember my name, let alone the others.” Then, they offered her three gifts in trade of her soul:

Erin took none of their gifts but found an Ancient Mithril Coin after the strangers left, and dimly remembered the encounter like she would a dream.

The same night, Ryoka was also haunted by the other three of the Six while she returned from her delivery run to Invrisil: Kasigna, Cauwine and Norechl. She conversed with them around a fire and one of them banished Ivolethe when the Fae attempted to counsel Ryoka against listening to them. Norechl offered her two lost fingers as a gift. Ryoka fled the fire, barely escaping them with her life. She threw her moving fingers into her campfire and also burned her scarf that had been touched and turned into something evil as well.[17]

Other Earthers aside from Erin and Ryoka also were confirmed to have met people on midwinters day, and might have received gifts, as well. Many Earthers however didn't see those visitors, as it seems easily possible to fend them off: you should be behind stone and iron before the night is deepest (according to Ivolethe, hinting that the apparitions might be restricted like the Fairies themselves) and "keep the fire lit. The night is not over." (according to Tamaroth. It was demonstrated that the entities could be fended off with fire because they would first suck away that light and warmth before moving on to the living).[17] 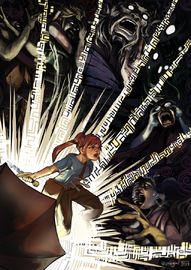