The Wandering Inn Wiki
Register
Don't have an account?
Sign In
Advertisement
in: Characters, Humans, Nobles,
and 3 more

Chapter 7.28
Delanay d’Artien from House Artien is a Human that likes dressing himself in the typical Vampire Hunter style. Despite his nobility, he works as an Emergency Runner, a special type of City Runner that run when there’s trouble.

He is a young man, with hair that had a silver strands crossing his duller, brown hair. While his height is shorter than Ryoka (6'1),[1] he looks tough.

He dresses himself in the [Vampire Hunter] style, which consist of, from top to bottom, a long, rakish hat that would have fit any debonair [Duelist] in an action movie, bright red like blood, adorned with a sigil of a crossbow and an oversized arrow in silver, buckled around the brim, rather like a pilgrim’s hat, but meant for style, not utility.

Below his hat lay a silvery scarf, the most vibrant thing on him, wrapped around his neck. It glistened in a way that even silk would not; the fabric looked metallic.

He had on a modernistic, long-flowing trench coat that reached down his body. Red again, over a white button-up shirt that was only changed by the same sigil—again, drawn in silver, not gold. The jacket was outfitted with a number of compartments, both visible and concealed, and was thus practical and stylish. And stiff; it was dyed leather, not anything else. It looked old, but it was meticulously well-kept.

His pants were of course, loose, for he was a Runner, but even here, he wore red, darker, but noticeably thick as well for all they moved freely. Some composite fabric that gave him closed shoes, the four rings he wore, an amulet like a dagger around his neck, spectacles on his nose, and gloves.[2]

He works as an Emergency Runner, a special type of Runner that do not do normal deliveries, as they only run when there’s trouble and they need someone who can fight and deliver potions or antidotes.[2] 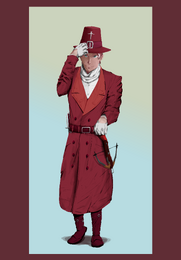