Drakes are humanoid Dragon-like beings, and one of the races of Innworld. Though they are the descendants of the great Dragons of old, they only bear a passing resemblance to them, and distinctly are mortal beings who can level. Some Drakes are descended from Wyrms rather than Dragons, but it is not clear what the distinction is.

Despite their reptillian appearance, Drakes are mammals, giving live birth and posssing mammaries.

Like their Dragon ancestors, Drakes possess sharp claws; if appropriately sharpened, they are tough enough to pierce Antinium carpace.[1] Their necks are adorned with spines, which can bleach over time for certain individuals, akin to balding in humans.[2] They also possess tails, the positioning of which is a large part of Drake body language.

Drakes have scales in a range of colors, with some even in coloration patterns. Green-scaled Drakes are the most common, while very bright- or dark-colored are less common, even moreso without patterns. Even rarer are scales that have a bright glow or a unique flame coloration.[3]

Drakes generally live past seventy or eighty years on average. This lifespan can be lengthened through consumption of numerous potions and artifacts, with some having reached a hundred and forty.[4]

Drakes are capable of arcane magic.

Drakes do not differentiate amongst each other based on scale colors like Humans are prone to. However, there are variants of Drakes:

The stereotypical Drakes are orderly people, readily obeying their own authorities, and sticking to their laws strictly. These laws are seemingly put into place to make Drake society a possibility, since Drakes tend to be very possessive and unwilling to share. Other traits are that Drakes are immensely proud of their heritage (naming Dragons as their ancestors) and their culture. Naturally, not all Drakes follow such stereotypes, but a surprisingly large and vocal amount of them tries to enforce such traditions, making their overall culture somewhat unyielding and static.

If there was a ranking for "bad-tempered species", Drakes would probably be at the top of that list, competing for first place with Centaurs and Minotaurs.[6] There are various sayings about Drakes, like "one Drake’s trouble, two is a fight, three will burn your house down, and four means war"[7] or "if the world was destroyed and there was only dust left, Drakes would fight over who had the most dust"[8], which respectively describes the aggressive and greedy stereotypes of Drakes.

Drakes like dry climate, enjoy the sun, and open spaces.[9] When it comes to choosing their home, however, Drakes prefer to settle behind safe and large walls, ideally enchanted.[10]

Very young Drakes like to bite everything they can fit their mouths around.[11] Later, they enter into a hoarding phase, when they can't share anything with others and even take other people's stuff (like the toys of fellow children). Even as adults, Drakes may retain that strong hoarding instinct.

Commonly for Drake cities, Drake armies are efficient, well trained and possess great officers and generals. However, this makes it harder for individuals to stand out, resulting in fewer high-level individuals outside of War Leaders compared to the Human armies in the north, who use elite forces supported by militia. Everyone is a bit higher level, but fewer are highest level.

Similarly, their better funded and trained City Watch are called to deal with monsters as much as adventurers are, resulting in fewer adventurers in general and of a lower level on average, as they aren't as needed.[12]

Drake cities throw military parades for their fallen soldiers. The cheering of the crowds is sometimes used to express grief, not just to celebrate the fallen as heroes. Drakes are often cremated, though richer and more important Drakes may be buried in a graveyard.

Soon after the funeral, wills of the deceased are read and their possessions are divided up. Almost everyone aged sixteen or older in Drake society has a will,[15] and everyone over the age of thirty has one.[8] They are necessary due to the possessiveness of Drakes, to prevent blood feuds over inheritance. It is also a way to show that they cared about the people they knew and leave them something to remember them by, or to tell someone they hated them one last time by leaving them nothing. Even distant relatives are expected to receive a trinket at least. Of all the laws in Drake society, wills are treated as the most ironclad. The only known exceptions are possessions lost in war, which are forfeit.[8][15]

This practice was inspired by the Dragons' custom of gifting a cherished piece from their hoard to mortals who had known them before their passing.[15]

Drakes speak the common language (Earth's modern English) but have a distinct written script that is different from the Latin alphabet that Humans use. Learning to read that script has been reported as rather easy.

Most Drakes wear ancient-Greek style togas or robes. Some of them wear sarongs, though likely only female ones.[16]

Some of the male Drakes wear rather little clothing, sometimes leaving their chests completely bare save for a light cloak. Female ones usually wear more garments.[17]

The traditionalist Drake society is somewhat sexist or at least paternalistic with regards to partner choices: Female Drakes, especially young ones, are regarded as not fit for marriage outside of their species and suggesting otherwise makes huge scandalous waves. Meanwhile male Drakes choosing a non-Drake partner are much more accepted.

As gender-intended symbols, Drakes use a straight tail for men and a curly tail for women.[18]

A huge taboo among Drakes is homosexuality. The term "Turnscale" is a derogatory term for homosexuals among Drakes[19]. The Watch in most Drake cities and towns violently crack down on the private affairs of "Turnscales" and displays of same-gender affection are widely regarded as offensive to Drakedom itself.[20] Even if those who say so are a vocal minority, they have forced queers - including transgender - into the criminal underworld.[21]

Many if not most Drakes do not like Lizardfolk at all, possibly due to their resemblance. Drakes are mammals and see themselves as superior when compared with egglaying Lizardfolk. Seeing how Drakes tend to be orderly, proud and often grumpy, they loathe the super-social, talkative nature of Lizardfolk. The other way around, Lizardfolk seem to be aware of the animosity towards them, but find it funny.

"Lizard" is one of the ultimate insults towards Drakes, especially when uttered by non-Drakes. Non-Drakes who honestly confuse the two races should expect to be subject to stern lectures by Drakes.

Most Drakes officially accepted Gnolls in their cities as a large and helpful minority, given that there are much more Drakes in all of Southern Izril than Gnolls. Only rare Drake communities have up to a third of their population being Gnolls; one fifth or less is more common; and at some places there are lower percentages even.

In some cities (especially the more traditional ones) Gnolls are often discriminated against, with loopholes in laws to prevent them from gaining societal advantages such as citizenship. Interspecies marriage is often frowned upon or derided by more traditional Drakes, though it is decidedly more common than Drake-Human marriages or Gnoll-Human marriages. In Drake cities where Gnolls are a minority of the population, they tend to be segregated in "Gnoll-districts," whether it be forced or by choice. Some cities force Gnolls to work as Paworkers, which are essentially indentured servants, making them wear collars as a sign of ownership.[22] Drake-Gnoll relations are more accepting in places such as Liscor or Oteslia, both locations with a larger Gnoll population.

Humans had landed on their shores millennia ago, and the Drakes never forgave the land they had ceded to them. Drakes always considered them a threat and a foe. It was more of a bad rivalry now, as neither side did more than send armies to the Bloodfields each year to kill each other. But give them half a chance and the Drakes would happily invade the north, while the Humans would do the same.[23]

There were quite a few Drakes who’d decided to live in Human lands, for all they were actively discouraged from doing so by the Drake cities. But while they hadn’t invaded each other in decades, the Humans and Drakes were still nominally at war, having conflicts every year at the Bloodfields.

Both the Chandrarian race of the Garuda, the Balerosian race of the Dullahans and the Terandrian race of the Dwarves are minorities in Southern Izril. Multicultural Pallass has a larger population of the first two, but this is probably due to them standing out even in the Walled Cities. It is implied that they have their own prejudices to deal with, as Bevussa Slenderscale, captain of the Wings of Pallass, is forced to masquerade as one of her team's members in Pallassian society.

Like most species, Drakes regard Goblins as monsters, even more so after the recent Goblin Lord. However, Liscor recently discontinued the bounty on Goblins.

Relations with other races[] 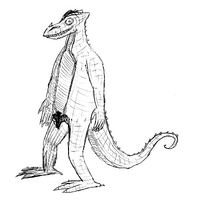