Chapter 3.00 E
Durene is a half-Troll and Laken's [Paladin] and consort.

Durene has brown eyes[1] and her skin is rougher than normal and has cracks in places. Her inside palm is fairly smooth if callused, though. Durene is half-Troll, and is six foot six or taller.[2]

Durene's Human mother had lost a previous family and lived alone near the village of Riverfarm. Durene's Troll father was killed in combat with an adventurer soon after having gotten her mother pregnant. She never fully recovered from giving birth and raised Durene until her death, when Durene was four.[3]

After the death of her mother, Durene was taken in by the village, but had to sleep in a barn and eat scraps. When she was old enough, she returned to her mother's cottage and only interacted with the villagers when they needed her help as a strong laborer, hiding from adventurers.[3] This background led to her illiteracy and low intelligence.

When she met Laken, she behaved nervous around him, for fear of accidentally hurting him since he was blind and physically much weaker than her. She was in open disbelief about being treated like a normal person, but quickly hid that surprise so that Laken would not change that behavior.

She did not tell him about being Half-Troll, although Laken knew that she was different. When winter arrived, Yesel and Prost Surehand, [Farmers] from Riverfarm, tried to convince Laken to come to the main village for safety, and told him her secret. Laken insisted in staying at Durene's cottage and so they became involved within a month of Laken's arrival. Laken granted her the [Paladin] class.[3]

When Laken claimed the buried village of Riverfarm as part of his Unseen Empire; she and Gamel accompanied Laken to Invrisil. She remained in his inner circle during the reconstruction of Riverfarm. Laken chose Durene over [Lady] Rie Valerund.

After she was wounded in the battle of Lancrel after attacking Pyrite, Durene stayed in Riverfarm while Laken joined Tyrion Veltras army to provide trebuchets for the siege of Liscor. She opposed his choice to take Goblin prisoners instead of killing them. 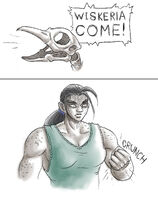 Retrieved from "https://thewanderinginn.fandom.com/wiki/Durene?oldid=30595"
Community content is available under CC-BY-SA unless otherwise noted.