The Wandering Inn Wiki
Register
Don't have an account?
Sign In
Advertisement
in: Characters, Half-Elves, Aliases,
and 4 more

Grand Magus Eldavin is an alias that Teriarch uses among mortals when he wishes not to be recognized as his true persona.

The image of Eldavin is created as a projected Simulacrum that Teriarch can maintain over large distances without leaving his home.

Eldavin is an overly attractive old guy with a beard. His hair is a pale silvery white that has a luster and shine to it. His skin tone first appears to be white, but on second glance you notice that it is a moderate olive brown, but whitened from not being in the sun for a while. He has the body of model or athlete past his prime but with the same body, and wears magical robes that look shinier than silk. His eyes are both cerulean (azure-blue) and helioptrope (amethyst-violet), although the colors are of unnatural deepness, as they show a tiny bit of magic caught forever, and are ever-shifting their exact hues.[2][3]

In the aftermath of his battle with Cognita, having forgotten that he is a Dragon. Eldavin's personality largely resembles Teriarch's. However, he lacks Teriarch's world-weariness and is eager to live. He is much less restrained in disseminating his magical knowledge to others and is intent on accumulatating political power in Wistram. Additionally, he is much more promiscuous, sleeping with several young women.

Teriarch used this appearance in his first three interactions with Ryoka while hiding his real body behind an illusion; although he used his real name in these exchanges.[2] After she broke his spell that affected her memory, Ryoka confronted Teriarch with knowing the truth, and he stopped using the facade.[4]

Teriarch used the simulacrum again when he sought out Erin on her way back to Liscor, when she helped him with his copied iPhone.[3]

Teriarch was reminded of the name "Grand Magus Eldavin" which he had used for his dealings in the past, for example with Wistram. Wistram remembered and still sent out invitations for conferences or other gatherings.[5] As Eldavin, he had not made a public appearance for decades, though.[6]

When he next confronted Ryoka and Erin using the simulacrum facade in the ruins of Celum, Teriarch re-introduced himself to them as Eldavin, and urged Ryoka to not address him as Teriarch. He then followed the two Human women to The Wandering Inn, where he impressed everyone with his magical prowess, knowledge and age - admitting to have known Zelkyr and clearly demonstrating to be an ancient Grand Magus, humbling Grimalkin and all other Mages at the inn. True to his real personality, he was rather dismissive of most petitioners and acted aloof towards most of the people trying to gain his attention.[7] Eldavin challenged Erin in chess and had difficulties beating her.[8]

Eldavin also transferred his personality to Magnolia Reinhart's estate in order to repair her carriage.[9] 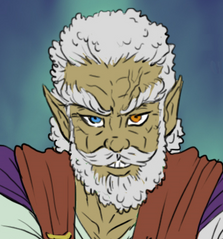 Spotting chess moves, by Demonic Criminal
(A Meeting of Druids) 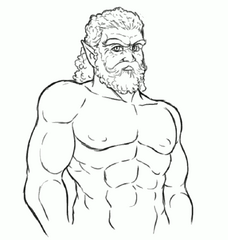 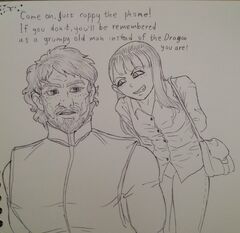