The Wandering Inn Wiki
Register
Don't have an account?
Sign In
Advertisement
in: Characters, Half-Elves, Adventurers,
and 2 more

Elia Arcsinger is a Half-Elven Named Adventurer and the Captain of Arcsinger’s Bows. She is famous for having slain the Goblin King, Velan.

She has blonde hair, and a pale face.[1] Her appearance looks like she's in her late twenties.[2]

Despite her famed reputation, Elia is quite friendly, treating Ceria as an equal. She is described to be retiring in person. She is reluctant to enter high-level engagements over her protectiveness of her daughter.[3]

During the Second Antinium War, Elia succeeded, to everybody's confusion, in killing the Goblin King, Velan. None doubt that she did the deed, namely to have fired an arrow that pierced his eye, resulting in the fatal injury. However, what none can understand is how the arrow could even hit its target. The Goblin King should have been able to avoid it or catch it, as he had done numerous times in other battles.

Some speculate that he failed to do so in this case might have been due to the chaos of the battlefield, or the effects of one of the spells he endured. Nevertheless, there remains a vocal minority who claim that Elia Arcsinger used a special Skill or had some other enchantment on her body she herself may have been unaware of. Or perhaps her latest abilities were the reason for her miraculous shot.

Elia possesses a powerful Skill that terrifies Goblins, even powerful ones, which became evident when Tremborag, Garen, and Reiss were affected by it as well. The range of said Skill is gigantic, seen by it covering a whole mountain.[5] 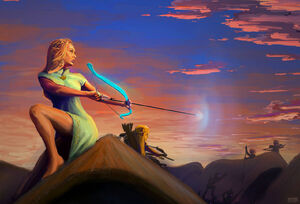