Chapter 5.12
Embria Grasstongue is a Drake and Relc's daughter. She is also a [Wing Commander] of the 4th Company of the Liscorian Army.

She is around Olesm's height,[2] has bright red scales, and is in the physical prime of her life.[3]

An enchanted spear with a tip that had been given a very fine metal inlay that made it look like blue tracers of metal were forged into the spearhead.

It can inflict, without the use of magic, bleeding wounds that don’t stop, and makes the bleeding worse since it takes far longer to clot. It can also halts regeneration.[1] 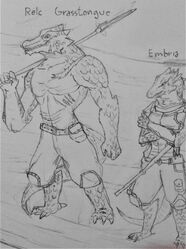 Retrieved from "https://thewanderinginn.fandom.com/wiki/Embria_Grasstongue?oldid=28848"
Community content is available under CC-BY-SA unless otherwise noted.