Chapter 3.20 T
Falene Skystrall is a half-elf, a Gold-rank adventurer and a member of the Silver Swords. She is also a Wistram Graduate.

Falene is tall, glamorous, the picture of what half-Elves aspire to be—in a cliché way,[2] with unearthly features and light red hair.[1]

Falene is a tradionalist, seen for one by her addressing fellow female Half-Elves with "sister". Moreover, she tries to act like she thinks true Elves had, therefore conducts herself always with grace, dignity, and is the voice of logic and reason within any group.[1]

Around three decades ago, Falene graduated from Wistram.[1]

Not only does Falene know several Tier 4 spells but a Tier 5 one as well. Nevertheless, she is fond of rapid casting of low-Tier spells in quick succession, thereby overwhelming her foes with sheer variety and firepower.[3] 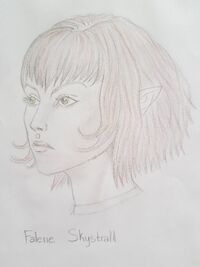 Retrieved from "https://thewanderinginn.fandom.com/wiki/Falene_Skystrall?oldid=25436"
Community content is available under CC-BY-SA unless otherwise noted.