Flos ascended to the throne of Reim at an early age, at fourteen or fifteen years old after the passing of his mother. King Treland of the neighboring kingdom of Helios invaded at this time, hoping to take advantage of Reim's period of weakness and seize its lands for his own kingdom.

Flos could not stop the invasion by force of arms. So he instead resorted to trickery, riding around Helios' armies and, along with Gazi, making his way to the enemy kingdom's capital city, defended at this time only by a token force.

After taking the city's walls, Flos walked into the throne room and challenged King Treland to single combat. Flos Reimarch defeated and killed the higher-level [King] in this duel, thereby beginning the legend of the King of Destruction.

Flos' legendary campaign of conquest lasted for six or seven years, by the end of which he had conquered most of the continent of Chandrar, and forged alliances or neutrality pacts with the very few nations which he did not conquer. After this was accomplished, Flos achieved something unprecedented in modern times, dispatching his armies to begin conquering other parts of the world. His armies landed and took territory on three continents - Baleros, Izril, and likely Rhir.

In Izril his armies, led by Amerys,[4] landed on the southern shores. However, they didn't get far, because they soon traveled back to Chandrar after having heard of him abandoning them.[5] In Baleros his armies suffered a defeat at the hands of Niers Astoragon, resulting in the death of one of Flos' closest friends, his lover, Queravia of the Seven. Her demise, and later Tottenval's, is what caused Flos to fall into depression (his "slumber", leading him to go back to Reim where he "slept" for the next 10 years.[6]

He "slumbered" in Reim, sitting and contemplating on a a chair in his throneroom, in front of his enormous golden throne.[3]

Flos' class and skills are specialized in warfare. 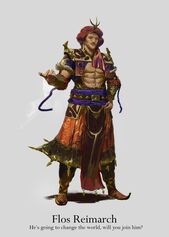 Retrieved from "https://thewanderinginn.fandom.com/wiki/Flos_Reimarch?oldid=22401"
Community content is available under CC-BY-SA unless otherwise noted.