The Wandering Inn Wiki
Register
Don't have an account?
Sign In
Advertisement
in: Characters, Antinium, Queens,
and 6 more

The Queen isn't like her subjects who look vaguely humanoid but appears completely insectile. She is gargantuan and possesses a massive, bloated body with huge feelers. She has wide, faceted eyes that glow with dim orange-red light.[1]

Despite the queen being quite large, she is, by quite a margin, the lightest of all Antinium Queens in Izril, which is proven by the fact that she is still able to move, even if just to a small degree.[2]

She was barely more than a child before she fled Rhir, created to venture a new world. With her, over 300 other Queens and several of their Centenium were sent, with the purpose of building an army, and then come back to defeat their enemy, the sleeping God. A rearguard stayed to fight for years, decades if need be, stopping their enemy to overrun the continent before their return. The Free Queen was just a student to the [Shaper Queen] Bessachidia, who could create, heal, and change Antinium to an extent far beyond any other Queen.

What the Antinium hadn't expected was the danger the sea posessed. First they were attacked by fleets of Rhir, persuing them in vengeful flight. Then pirates, united against the monsters from Rhir. They were fended off, with losses that came from the Antinium's natural weakness to water. Then great Storms came, summoned by Wistram and [Mages] across the world. However, even after all this, only a seventh of the ships had been sunk. In the end it was the monsters of the sea, Krakens and the like that slew the vast majority of the Antinium fleet.[3]

Only 4 of the 200 ships survived and of hundreds of queens, less than 20 survived. The Queen of the Free Antinium was one of them, with none being qualified or trained, hoping to be able to rebuild what was lost.[4]

More queens perished in early experiments on Izril. As they pushed and forced their bodies to accommodate the restoration of the species. The Free Queen was lucky to have been young, as she was deemed too frail to take part in the first tests. 8 queens died before the first new queens came to be, and all the queens were irrevocably changed, crippled by their choice.[3]

The Queen had endured the ridicule and scorn of her fellow Queens for many years for her attempt to create individuals.[5]

She dissented with the Grand Queen about the future of the Antinium in Izril after the Second Antinium War ended, and agreed to keep away from the other Antinium hives and move to Liscor where she built up a her new hive of the "Free Antinium". 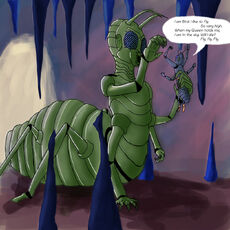 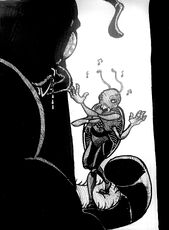 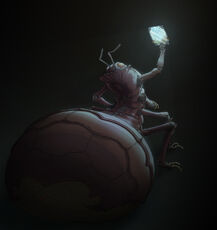 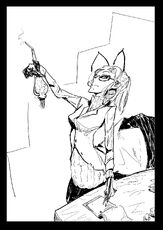