The Queen isn't like her subjects who look vaguely humanoid but appears completely insectile. She is gargantuan and possesses a massive, bloated body with huge feelers. She has wide, faceted eyes that glow with dim orange-red light.[1]

She was barely more than a child before she fled Rhir, created to venture a new world. With her, over 300 other Queens and several of their Centenium were sent, with the purpose of building an army, and then come back to defeat their enemy, the sleeping God. A rearguard stayed to fight for years, decades if need be, stopping their enemy to overrun the continent before their return.

What the Antinium hadn't expected was the danger the sea poses. The majority of those that left the continent was killed due to attacks of kraken and other monster from the depths.

Of hundreds of queens, only 8 survived, the Queen of the Free Antinium being one of them, with non being qualitfied or trained, hoping to be able to rebuilt what was lost.[2] 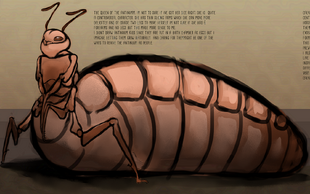 Retrieved from "https://thewanderinginn.fandom.com/wiki/Free_Queen?oldid=23049"
Community content is available under CC-BY-SA unless otherwise noted.