The Wandering Inn Wiki
Register
Don't have an account?
Sign In
Advertisement
in: Characters, Goblins, Hobgoblins,
and 9 more

Chapter 2.27 G
Garen Redfang was the leader of the Redfangs, the strongest Goblin tribe in the northern area of Liscor.

His height is around that of a normal Human man. He bore battle scars all over his body, and presumably had red stripes painted on his body like other members of the Redfang Tribe.

Garen Redfang was very clear and firm on one point: No unprovoked sexual assaults on other races - if they were peaceful, they were to be ignored, or treated like other Goblins. Only the worst kinds of Goblins would prey on their own tribemembers: So why degrade yourself for other species? It was a mark of pride among the Redfang Goblins that they were like their leader in this respect.[1] Raiding and killing Human caravans for their wares, was not against this principle, however.[2]

Before becoming an adventurer[]

He was once a member of the Old Fire Tribe, having been named by the [Shaman][2], but he had wandered away from his tribe as soon as he had grown older, dissatisfied with working for his Chieftain and wandering to become stronger. Garen had learned to fight by himself, and he’d leveled up as a [Warrior] quickly, becoming a Hobgoblin as well.

One day, he met by chance a small Goblin who was running from a wyvern. He saved the small Goblin, and with his help, the two slew the wyvern.

During his stay in the tribe, he and the small Goblin learned from their Chieftain that she looked back and saw the memories of Velan the Kind last months before he died. They discovered that Velan hid his treasure in the High Passes and locked it away with 2 keys. Velan then gave one to Tallis and kept the other for himself.

One day, the small Goblin became a Hob, and he and Garen, decided they were strong enough to challenge their Chieftain. They lost and had to flee from the angry Chieftain and others Goblins chasing them.

So for Garen to become a great warrior and the Hob with magic the Chieftain they wanted to be, they decided to split up. While it was not an easy choice to make, they were so fearless and overconfident that the two of them thought they could do anything.

Becoming and being an adventurer[]

Garen would make a mask and wear a hood and go north to become a famous adventurer in Human lands, while the Hob with magic taught himself an illusion spell so he could study in Drake cities and become a [Mage] like no other. Before leaving they swore to meet seven years later at the very spot they split up.

Garen ended up terrorizing a stretch of land far to the north by himself, clashing with other Goblin Tribes and local monsters until he came to the attention of a Silver-rank team of adventurers, who hunted him down, and nearly killed him. The leader of the adventurers was intrigued by Garen, who was intelligent enough to fend for himself and clearly independent. She spared his life, instead just chasing him away.[2]

Garen had fled, but the encounter with the adventurers had changed him as well; he grew curious about the Humans and other species who he’d only regarded as enemies and prey. Consumed by his desire to understand more, Garen disguised himself as a traveler, hiding his green skin and face behind robes and a crude mask and gone into villages and towns, listening to Humans talk. Garen soon learned to speak passably in the Human language, and no one would suspect him as a goblin being so tall, or peaceful. Garen than when't searching for the adventurers who’d spared him once before. He tracked them down, and after finding them, he’d challenged them a second time.[2]

He lost again, but this time he’d volunteered to join their group. After much debate, he’d been accepted, and so Garen Redfang had become the first Goblin to ever journey with adventurers. With his team, they’d take on normal monster-hunting requests and even explored dungeons, eventually progressing to Gold-rank status. That was how Garen had gotten his sword, and become such a devastating warrior.[2]

Seven years later, Garen went to fulfill the promise to meet the Hob with magic. After waiting and re-encounter him, they embraced and sat down, laughing and talking. At first they were ecstatic as both had fulfilled their promise and both were alive. Garen then told him that he wanted the Hob with magic to join the Halfseekers, but the Hob with magic wanted something else. He told Garen about his master and he showed him what he could do by raising a zombie.

Garen backed away, sword drawn and then leapt forwards and slashed the zombie in half. Garen did not accept what the Hob with magic had done. He called his brother a traitor and a slave. As what Goblin would kneel to a Human, let alone a [Necromancer]. He told him that Goblins could not be slaves and that he hated the undead.

They argued, then fought. After retreated Garen told him that he will not accept that the Hob with magic had a master and that he did not wish to be part of the Necromancer’s plan — to make a Goblin Lord. He swore to oppose him, if he ever tried to carry out the plan.

Garen would then go back to be an adventurer with his team. After a year, while they were exploring the bottom of the dungeon called the Sepicus Delve, they found a key, a magical orb of some kind, some spell scrolls and a few magical weapons.

Garen recognized the key as one of the two that unlocked Velan's treasure. While he tried to convince Halassia, Thornst, Keiliam, and Ukrina to help him find Velan's treasure, they refused and tried to force him to give up the key. However, Garen unwillingly killed his teammates and fled with everything else they found in order to hide what he really stole.

After his betrayal, Garen escaped to the High Passes and tamed a Carn Wolf. He then formed the Redfang Tribe by finding the biggest tribe around and challenged the Chieftain to a battle. He then settle his tribe in the High Passes in order to search for Velan’s treasure.

Soon after Garen realized that he was a terrible Chieftain. So instead of expanding, the Redfang tribe had established a local superiority, rivaled only by the Broken Spear Tribe and Ghostly Hand Tribe to the south.

At some point, Garen met Teriarch, who granted him an audience due to possessing Velan's key. However, he was forcibly removed due to acting rude and challenging the Dragon.[3]

When Garen heard of the Goblin Lord's power, he gathered his tribe and the nearby ones, to form an alliance that would be able to defeat the Goblin Lord. The problem was that they were fractured, having no great Chieftain to lead them. Garen was the strongest, but he couldn’t manage them effectively. But when he’d heard of an upstart Chieftain who’d absorbed several tribes and was using actual tactics and formations, he went to test her, to see if she could be the one to lead them against the Goblin Lord.

Garen challenged Rags and beat her repeatedly on the battlefield over the course of at least three days, but realized that she had the abilities to lead her tribe and deploy strategies, so he surrendered when she killed his mount.[4]

He then witnessed how she transformed and organized his tribe, and told her some part of his background as adventurer and becoming a leader to his tribe, urging her to resist the Goblin Lord.[2]

His strength is equivalent to a Gold-rank Adventurer. 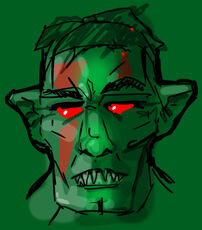 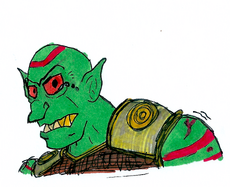 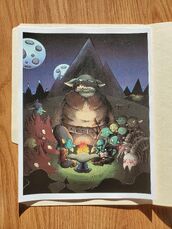 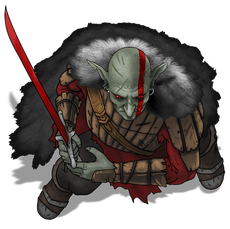 Garen on foot, by Devin Night (commissioned by Yarrick)

Garen on Carnwolf, by Devin Night (commissioned by Yarrick)