Gazi was born a slave. Flos found her when she was a child. He bought her and freed her within a year. Ever since then she has served him[4], fighting with him as his sworn sword and leading his armies to victory.

Gazi would often ride alone, scouting ahead and behind, safeguarding Flos' kingdom. With her eye and Skills, she slew every [Scout] that sought to the movement of their forces, and killed each [Assassin] or [Spy] that dared lurk within the borders.

Thanks to her, other nations feared to commit their forces, because they had no clear image of Flos' forces. Some could use magic, but if they sent a person, that person would die within a fortnight. Gazi was feared for her ability to hunt down anyone and find their deepest secrets. When battle called, she would ambush the enemy, infiltrating the camp and killing a valuable soldier or stealing battle plans. Then she would slip away.[5]

Fourteen years after Flos entered his "slumber", Gazi left in search for something that could awake his passions once more, becoming a Named Adventurer in the process. She didn't return to Flos for 6 years, that is until she had heard of him having "woken up."[1]

Gazi met Erin as she traveled the Wilderness near Liscor, where the young [Innkeeper] was burning a nest of Shield Spiders.[2] She then organized a cart to Liscor for the girl and accompanied her there, where her person caused quite some stir.[6] Gazi revealed her interest in Erin to Ceria and Gerial, before she travelled to the south[7] to kill the Gnolls that Krshia had called to help with learning about Erin. Gazi also met Ryoka south of Liscor. She finally ambushed Erin and Ryoka when they emerged from the Ruins of Liscor, having rescued Ceria and Olesm. She intended to kidnap them for her [King] Flos so that he would wake up again, but failed in restrict Erin, who poked her magical eye out.[8]

Gazi returned to Chandrar and Flos empty-handed, but she already knew from Ryoka that her liege was active again. A week after her embarrassing failure, she arrived in Reim and met Teres and Trey Atwood there.[1]

Her Gazer heritage allows her to cast spells instantly as soon as she looks at her target.[7]

Her eye was her greatest weapon and defense; the gift of Gazers which Gazi had in turn honed and made even stronger than normal. While her four peripheral eyes could still see at great distance and even through objects at close range, they were nothing compared to her main eye.[1] With her highly skilled eyes, she can also perceive everything in her surroundings, as well as detect the names, classes and skills of others.

She can also see Scrying Spells.[9] 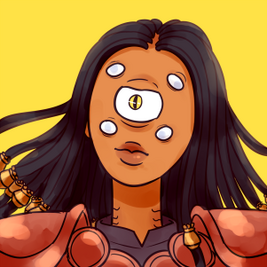 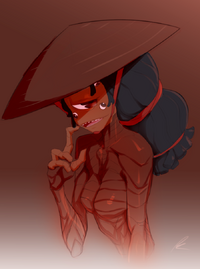 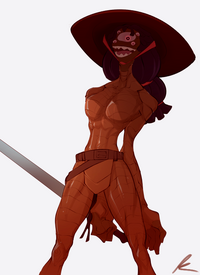 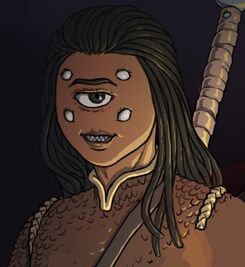 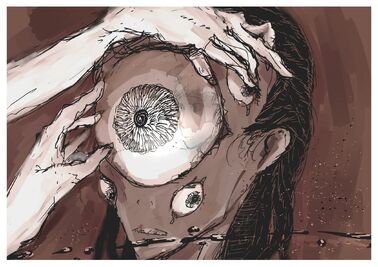 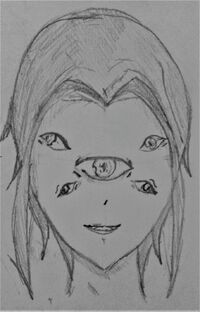 Gazi keeps an Eye on You, by Chalyon 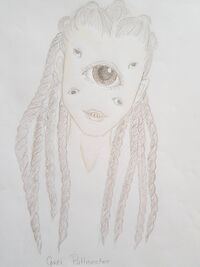 Retrieved from "https://thewanderinginn.fandom.com/wiki/Gazi_Pathseeker?oldid=31375"
Community content is available under CC-BY-SA unless otherwise noted.