She has brown hair and pale, olive skin. Her right arm is practically white.[2]

She was born in Wisconsin, though is Italian by heritage and often visited Italy.[1]

She appeared on the continent of Baleros, and to make ends meet, enlisted in the Raverian Fighter’s Company. She served in the 6th squad of the 4th Battalion, led by [Sergeant] Thriss.[1]

During the battle near the gold mine, Geneva gained helpers among fellow soldiers, most notably Okasha, a disabled Selphid she healed. They began using the symbol of the red cross, and Geneva became famous for tending to patients regardless of who they fought for - this led to enemies calling off their attacks when they saw Geneva.

The humans of her company began to harbor ill-will towards Geneva because she didn't prioritize healing the other humans first - not even her friends when they had arrived lightly wounded before others. She was ostracized, and Thriss attempted to kill her, and nearly succeeded before Okasha ran him through.

Geneva nearly died from a fractured spinal cord caused by two blows to the back by Thriss, but was saved by merging with Okasha. Despite her broken spinal cord, which should have left Geneva paralyzed, sharing a body with Okasha allowed her body to function normally.[3] 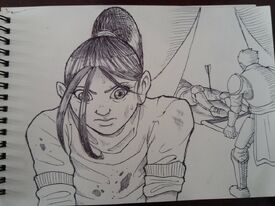 Retrieved from "https://thewanderinginn.fandom.com/wiki/Geneva_Scala?oldid=31453"
Community content is available under CC-BY-SA unless otherwise noted.