Greydath of Blades
Greybeard
Old One

Chapter 3.28 G
Greydath or Greybeard is one of Velan's former Goblin Lords. He is an unusually old Goblin that outlived the last Goblin King and even remembers the king before that, Curulac.

Greydath is tall, as tall as Headscratcher is, and lean. He only wears a long-hanging loincloth with a belt and carries a greatsword on his back. Greydath's body is covered in scars. His most noticeable feature is his beard, which no other goblin has. It is grey and long, running down even to his chest in a wispy point.

As one might expect of someone of his age and as a veteran warrior, he has a few missing teeth.[1]

During the Second Antinium War, Greydath was known as the greatest warrior, someone whose skill at arms let him cut the air itself. He could match any [Blademaster], any [Sword Dancer] or [Duelist]. 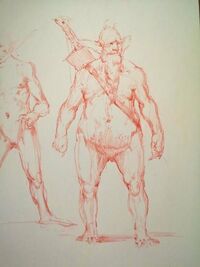 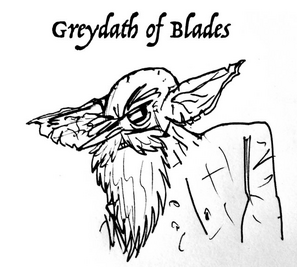 Retrieved from "https://thewanderinginn.fandom.com/wiki/Greydath?oldid=31364"
Community content is available under CC-BY-SA unless otherwise noted.