Chapter 2.24 T
Halrac Everam is a member of the gold-rank adventurer group, Griffon Hunt. After the death of Ulrien Sparson, he becomes the de facto leader of the group.

Halrac is most of the time grumpy and prefers to be alone rather than dealing with others.

He has nerves of steel; no matter how much under stress he is, he never panics.

Halrac was one of the co-founders of Griffon Hunt, along with Ulrien. 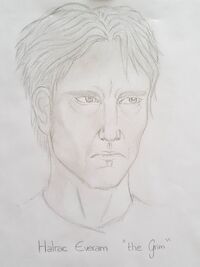 Retrieved from "https://thewanderinginn.fandom.com/wiki/Halrac_Everam?oldid=22860"
Community content is available under CC-BY-SA unless otherwise noted.