The Wandering Inn Wiki
Register
Don't have an account?
Sign In
Advertisement
in: Characters, Lizardfolk, Lamias,
and 4 more

Interlude – A Night in the Inn
Hexel Quithail is a Lamia and one of the best [Architects] in all of Baleros. He has been commissioned by Liscor's Council for the city's new expansion and construction plans.

Like every Lamia, he possess two human-like arms; and a more bipedal upper body. While his lower, serpentine half is long, trailing behind him. While ‘standing’ he is at average height. He has a scar on one cheek.[1]

Like many Lizardfolk, Hexel retains most of his cheerfulness in many situations.[2] He is generally professional, but the attack on his people traumatized him and he does not feel comfortable around groups of Drakes.[3]

As a city architect, Hexel is specialist in cities that deal with water, and has designed a new palace in Terandria, a city for the Iron Vanguard, and three cities himself.[4]

In his younger years, he toured parts of Chandrar to look at some architectural marvels. He saw the Shield Kingdom Merreid and some of the forts made by Drevish at this time.[3]

After Liscor's new council was established, they decided that change was needed for their city. One of these changes was hiring Hexel as a rather famous [Architect] to help design and redesign new sections of Liscor along with other help he could provide. Although there was initial disagreement, the council did eventually come to terms with the fact that he was the best option for their budget and needs.[4]

It wasn't until later that Hexel finally did arrive at Liscor. He was attacked part-way through his journey and ended up losing many of his helpers, but he still agreed to stay with guarantees of protection. Hexel stayed at the Wandering Inn and also offered his services to Erin at this time.[1]

Besides redesigning and overseeing the city building process, he was also available for other projects such as building soccer fields,[5] building containment units for the Raskhgar,[6] and even helping design a secure entryway and security system for Erin's Magical Door.[7]

Throughout this whole designing process, Hexel was often in the company of Elirr, one of Liscor's council members. They soon developed a relationship with one another which they had to keep secret due to the stigma against turnscales. This didn't stop others from finding out like Mrsha, Krshia, and Saliss.[3]

After Erin's death, Elirr continued to stay at the inn seeing as how it was mainly used as living quarters for himself anyway. When Belavierr attacked though, he decided to find a safer and more private living space with Elirr.[8]

As a Lamia his scales are larger than a Drake’s, and his body is agile, with a form suited for intelligence and spellcasting.[1] 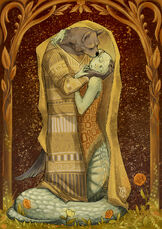 Elirr and Hexel: The Kiss, by Artsy Nada 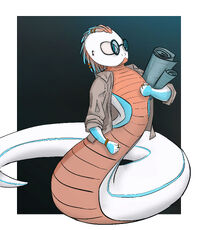 Hexel on duty, by Auspicious Octopi