The Wandering Inn Wiki
Register
Don't have an account?
Sign In
Advertisement
in: Groups/Organisations, Adventurer Groups, Silver-rank Adventurers,
and 2 more

The Horns of Hammerad is a Gold-ranked Adventurer team that is active in Izril.

The group was originally formed by Calruz, Ceria and Gerial,[1] two years before the events of Volume 1. Sostrom and Hunt also belonged to their senior members. These five were the longest and most dedicated Horns, each of them had also spent the years before in other adventuring groups.[2]

Other members joined the Horns of Hammerad less than a year before their arrival at Liscor, in case of at least two [Warriors] only a month before that.[2] Among these junior members were Terr, Coblat, Grimsore[3], Barr and Marian. These were the ten Horns of Hammerad that entered the Ruins of Liscor.

Some junior members, like Marian, signed on with the Horns only as temporary members, openly stating that they would leave once the group made a major haul.[2] This also explains the fluctuation among them, as the Horns were still twelve members strong when Ryoka encountered them the first time.[3] For example, prior to their arrival at Liscor, the [Mage] Peminac[4] must have left the Horns of Hammerad.[2]

History of the original group[]

The Horns of Hammerad were introduced as a group of twelve adventurers of around Level 20 each, fighting a Lich in the Ruins of Albez, when Ryoka delivered a batch of potions to them,[3] which earned Ryoka their lasting gratitude.[5] After their successful run in Albez, the Horns stayed for a while in Celum and then went to Esthelm to debate about their next dungeon run into the Ruins of Liscor.[6]

The Horns of Hammerad were then part of the well-prepared expedition of five silver-rank adventuring teams into the Ruins of Liscor, along with the Silver Spears, the Flawless Flights, the Circle of Reneë, Kyrial’s Pride, and the individual [Tactician] Olesm.[2] While in the ruins, the adventuring group triggered the release of Skinner, a lesser guardian of the Ruins, and inadvertently led to his attack on Liscor.

In that attack, the Horns of Hammerad were decimated; it was first believed that only Ceria survived, by hiding in stone coffins with Olesm. She was soon rescued after sending a distress signal to Pisces, using a coded message they had learned while at Wistram.[7] Gerial, Hunt, Terr, Coblat, Grimsore, Sostrom, Barr[8] and Marian died in the ruins. Gerial's, Sostrom's[9] and Hunt's[10] deaths and/or corpses were explicitly shown or mentioned.

The Horns of Hammerad reformed with new members of Ceria, Yvlon, Pisces, and Ksmvr.[11]

History of the reformed Horns[]

With funds from Erin and a map from Olesm, their first major expedition was to the Ruins of Albez.[12] Their exploration led to the successful discovery of a previously unknown mage's quarters. However, they accidentally triggered a fire construct, leading to the destruction of most of the remaining artifacts. Although the group was injured, with Yvlon suffering permanently fused metal to her skin, they successfully brought hundreds of pounds of melted gold and gems out of Albez to Ocre. However, the group decided to forfeit the majority of their treasure to provide repatriations to those who had died in Liscor due to Skinner's attack.[13] They sent the magical treasures they discovered with Ryoka to Invrisil to be appraised.

After leaving Ocre, the Horns came to Celum where they met up with Erin, who had been stuck in the city due to threats of Goblin Raids.[14] They participated in a guard mission to deliver Erin back to Liscor with the wagon driver Termin. Prior to departing on this mission, Pisces and Ksmvr traveled back to Albez to recover a magical artifact from the Mage's quarters, a door with an embedded teleportation spell. Erin asked for and received the door, and created a magical teleportation link between a connected entry in Octavia's shop. While returning to Liscor, the Horns met Teriarch, passed through the ruined city of Esthelm, before arriving back at the Wandering Inn.

After returning back to Liscor, the Horns teamed up with Griffon Hunt and the Halfseekers in coordinating the combined rescue of Esthelm by the cities of Liscor and Celum.[14] They participated in the Christmas celebrations hosted by Erin. After Ryoka's return from Invrisil, they were equipped with significantly upgraded equipment, primarily as a result of the sale of a magic wand recovered from the Mage's Quarters.[15]

The Horns lived in the Wanering Inn for several months, participating in the defense of Liscor during dungeon attacks. They were assisted in defending the Inn from the Face Eater Moth assault, and came up with the successful plan to ground the Moths with a magical rainstorm.

Captain Ceria was captured during the Raskghar attacks, and spent several days as their captive, attempting to subvert them to little success. The other members of her team joined in the repeated assaults on the dungeon, Pisces in particular overtaxing his magical reserves with repeated resurrection of his Bone Horrors, to the point of sickness from excess mana potions. At the time of the final assault on the Raskghar camp, Ceria was able to convince Calruz to turn on his monster tribe, once it was clear they would lose. 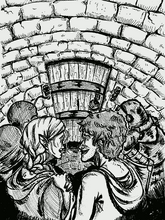 The new Horn encounter the Magical Door, by Cortz
(3.02 H)

The Horns vs Thresk's fire construct by Demonic Criminal
(3.07 H) 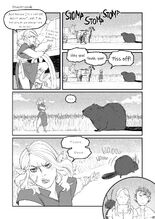 The Horns in piles of Gold, by Demonic Criminal
(6.10) 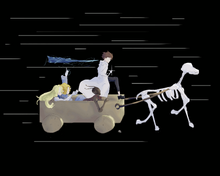 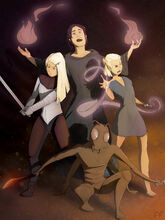 Horns of Hammerad by mg 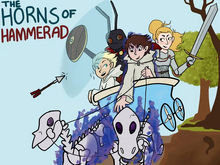 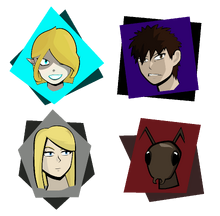 Horns of Hammerad by by Zelanters

Horns of Hammerad in a Skyrim crossover, by Demonic Criminal 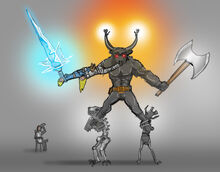