The Wandering Inn Wiki
Register
Don't have an account?
Sign In
Advertisement
in: Characters, Humans, Earthers,
and 6 more

Imani is an Earther from Nigeria,[3] who was teleported to Innworld. She and a small group of other Earthers, were for a time under Lady Magnolia's care before being sent to The Wandering Inn in Liscor by Ryoka Griffin.

She is a young woman with dark skin.[4]

Imani was traumatized after witnessing her entire group being eaten by Crelers. Showing symptoms of PTSD and agarophobia, she was constantly fearful, even in the safety of Magnolia's mansion.[4] However, she was gradually recover from her trauma after arriving in Liscor, helping out in the inn's kitchen, and finding love with Palt. Having found her inner strength, Imani has shown to be happy and content in Liscor, even refusing the chance to go to Wistram.[5]

As the undisputed ruler of The Wandering Inn's kitchen, Imani is one of the few people who can push Erin around, albeit regarding in food matters. She dislikes the unhealthy dishes that Erin cooks and possibly fast food in general. Imani can be surprisingly stubborn.[6] She is also gutsy, being able to prepare a giant rat dish for Hexel.

Imani was in the Chicago airport with a group of people when they were transported to Innworld in a remote area.[4] Unfortunately, they appeared right next to a nest of Crelers. To survive the Earthers climbed on rocks since the bigger Crelers couldn’t climb them. As for the smaller ones, the Earthers had to keep trying to throw them off.[7]

After a moment of respite, they received a chatroom invitation sent by BlackMage. Using the username [asdf], they begged for help, but to no avail.[8]

At some point, all people in Imani's group were killed with her being the only survivor. She would eventually find herself in a small village until Lady Magnolia found her, and brought Imani to her residence in Invrisil.[4]

The story first picks up with her and other earthers being protected by Magnolia Reinhart. It is there that she explains her arrival on Innworld and the dangers she encountered. It is also assumed at this point that Imani's group was the user [asdf] due to their similar experiences.[8][4]

After leaving Magnolia's care, she and the Earthers are sent to the Wandering Inn by Ryoka who confirms for the reader that [asdf] was Imani's group.[7]

The Earthers were briefly stuck in Invrisil when they ran out of money due to poor management, but the group did eventually arrive at the Wandering Inn anyway when the Portal Door was set up by the Horns of Hammerad.[9] Imani was the most responsible of the group, from the beginning, but she was always hindered by her previous trauma. This came to a head when the group decided to wander the plains around the Inn and they all ran into six Rock Crabs. After a close call with those, Imani was once again inconsolable though she was helped back to clarity with care from Mrsha and a [Calm] Spell from Typhenous.[10] From this point forward, Imani was still traumatized, but she did manage to help out around the Inn by helping prepare dishes.[11][12]

Eventually, Imani started helping out more with meal preparation and started cooking along with Palt.[13][14] As time went on, Imani got used to seeing strange sights and grew somewhat less fearful overall.[6]Along with the strange sights, Imani also slowly got used to Palt being with her and the two developed a relationship with one another.[3] She also helped introduce new dishes both from her home continent and elsewhere that Erin didn't have the ability or patience to make including croissants,[6] fufu,[14] mandazi,[3] risotto,[15] and others.

Later in the volume, Imani decided that she was done dealing with recipe thieves or spies that had been coming to the inn ever since Erin first introduced new or interesting food from Earth. To resolve this, Imani started offering free lessons to anyone that wanted to learn how to cook the food that she made and would sell the recipe to those that didn't want the lessons.[16]

After Erin's death, many members of the Inn left. Imani was one of those that stayed at Liscor. She got a temporary job at the Drunken Gnoll and she also spent her time by upgrading her lessons on cooking into full classes.[17] Imani still sent food back and occasionally cooked for The Wandering Inn , though there weren't many guests left.[18] Imani and Palt also grew closer during this time, confirming their relationship and being more openly affectionate.[19][20][21] When Belavierr destroyed the inn, Imani and Palt relocated to Liscor.[22]

After Erin's return, Imani continued to help cook for The Wandering Inn.[23] It is revealed that she and Palt opened up their own kitchen in Liscor, calling it Barehoof Kitchens.[24] 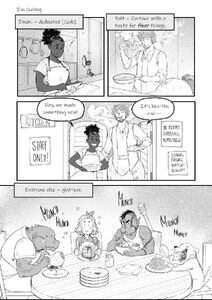 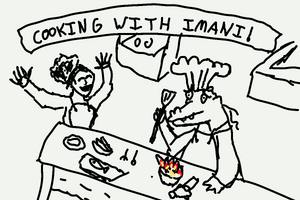