The Wandering Inn Wiki
Register
Don't have an account?
Sign In
Advertisement
in: Characters, Humans, Earthers,
and 11 more

Chapter 7.34 C
Inkar is an Earther from Kazakhstan who was teleported to Izril and fell in with the Longstalker’s Fang Tribe.

Inkar is kind-hearted and resilient. She possesses great fortitude. able to survive in the wilderness by herself for nearly a month before stumbling into the Longstalker's Fang Tribe. Despite not being used to a non-Human species, she was able to ingratiate herself with the Gnolls, even becoming an honored member amongst them.[1]

TBA From Interlude – The Tribes of Izril

TBA From Interlude – The Tribes of Izril 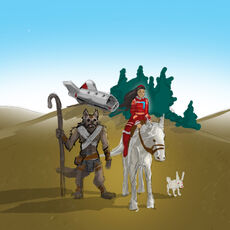 Plane Shifting by mg
(The Tribes of Izril)