Izril, also known as Issrysil, Dragonlands and the Unconquered, is the third-largest continent of Innworld. It is home of the Drakes, Gnolls, and Humans.

The two names the continent is called are used by different groups: Issrysil is the name used by Drakes, while Izril has seemingly been adopted by the other races. Likely due to the difficulty of pronouncing the former one.[1]

The Five Families are the first humans who settled on Izril. A few thousand years ago they fought against the original inhabitants and drove them to the southern half, therefore conquering the northern side.[2]

Currently, most of the inhabitants of the lower half consists of Drakes, while nearly a third of the population down there are Gnolls. Nevertheless, other races can also be found there, for instance, a few hundred Humans, some String People, Centaurs, or even Selphids. Those are just individuals, though, and not a community. Aside from them, a good amount of Minotaurs visit frequently.[3]

It is located south of Terandria.

It is the third-largest continent, with an estimated North-South span of over 8,000 miles.[4]

If that estimate is about precise, Pirateaba's map suggests an East-West span of maybe 7,200 miles; and the land area of Izril (six huge lakes already excluded) can in that case be estimated to be roughly around 25,500,000 square miles. This corresponds with Ryoka's assumption that Izril is larger than even Eurasia, Earth's largest continent with 21 million square miles.

The center of the continent is shaped by a gigantic mountain range that cuts the continent in two. These mountains are either entirely or in parts called the High Passes. Less than a hundred miles away from them in their shadow lies Celum.[5]

The busiest parts of northern Izril are the northern port cities, where most of the nobility live and where the really important adventuring areas are located.[4]

A lot of landmass was added to Southern Izril following the events of the Meeting of the Tribes. The land was raised up from the sea by the three most powerful Gnoll ghosts, expanding the Great Plains and geographically displacing several Drake Cities such as Zeres, and covered in grasslands by Kishkeria's spell. 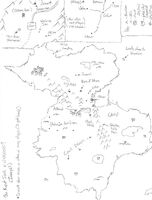 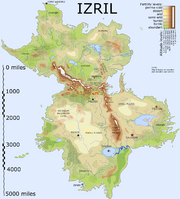 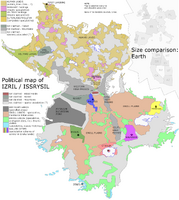 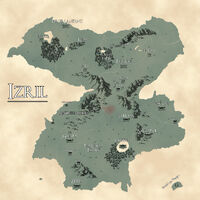 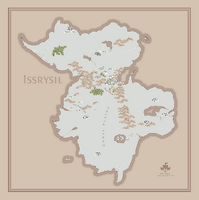 Cities and Towns of the North[]

Villages and other small places[]

Cities and Towns of the South[]

Villages and other small places[]