The Wandering Inn Wiki
Register
Don't have an account?
Sign In
Advertisement
in: Characters, Humans, Earthers,
and 11 more

Joseph Ortega is an Earther from Spain, who was teleported to Innworld. He and a few other Earthers were formerly under Lady Magnolia's care before Ryoka sent them to the Wandering Inn.

He has brown eyes and hair. He wears a black t-shirt whit a green android robot, jeans and a Fitbit watch on his wrist.[1]

Joseph initially held an optimistic outlook upon being transported to another world, believing it to be a grand adventure. However he was quickly disabused of that notion after experiencing the realities of being an adventurer. Disillusioned, Joseph turned to alcohol, becoming an alcoholic. Joseph is further discouraged upon meeting Ryoka and Erin, who were able to better adapt and thrive in Innworld, and saw himself as useless. However, he becomes revitalized when he introduces football to Liscor and the world, finding a purpose and a career in teaching football to people.[2] Despite being much happier, Joseph sometimes exhibits an imposter syndrome, comparing himself to others, and still drinks, though less than before.

Joseph's group of Earthers were international students visiting the United States. They had arrived in the airport in Chicago when they got teleported to Innworld. He and five others appeared in Invrisil in the middle of nowhere, then got arrested by soldiers, until Lady Magnolia arrived and got them out of prison and took into her home.[1]

After leaving Magnolia's care, he and the Earthers are sent to the Wandering Inn by Ryoka Griffin. They become stuck in Invrisil when they run out of coin due to poor fiscal management, but are able to arrive to the Wandering Inn when the portal door is set up by the Horns of Hammerad.

Joseph resided in the wandering inn for all of volume 7 and the first half of volume 8 along with the rest of his fellow Earthers, however, after the events of Belavierr's assault on the inn Joesph moved to Invrisil and the rest of the Earthers also went their separate ways.[3] 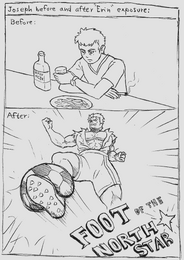 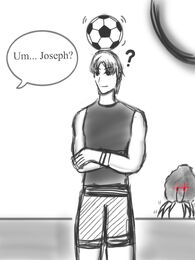