The Wandering Inn Wiki
Register
Don't have an account?
Sign In
Advertisement
in: Characters, Humans, Earthers,
and 8 more

Chapter 2.23
Kevin Hall is an Earthworlder from California, that was teleported to Innworld. He and 6 other Earthers, were for a time under Lady Magnolia's care.

Kevin is described of having the vibe of a ‘stoner dude’. Remarkably laidback, he is willing to go with the flow and is relatively uncomplicated. Additionally, he is charismatic, able to get along with Antinium and Goblins. Underneath his facade of an easy-going person, he is very smart and perceptive.

Back on Earth, he was working a part-time job at a repair shop for bikes.[1] The manager there had made him do all the bookkeeping on his own laptop.[2]

He and some other Earthers were at the Chicago airport waiting for their flight, when they were suddenly teleportation to Innworld. He and 5 other appeared in a city in the middle of nowhere, then got arrested and imprisoned by soldiers, until Lady Magnolia arrived and got them out of prison and took them at her home.[3] 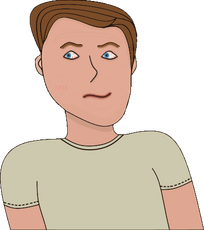