Chapter 1.06
Klbkchhezeim, mostly known as Klbkch, is the former Prognugator and current Revalantor of the Antinium hive that resides in Liscor.

He looked like all the other Worker Antiniums, with antennae, large black bulbous eyes, a dark brown chitinous body, four arms and two long pincers coming out of its mouth. He has a pair of swords at his sides.[1]

After his rebirth through the Rite of Anastases, Klbkch has a more humanoid form with only two arms and a slim, graceful body, not like a Worker’s or a Soldier’s,[2] that is slightly taller.[3] This form has been shown as superior to the Worker model.

Klbkch is a pragmatic and stern individual, placing the Antinium's well being above everyone else's—including his own and the [Queen]. While acting as a [Guardsman], he is a charismatic and kind leader. He is polite to everyone around him, leading him to be well liked by the city enough—so that he was voted in to become a Senior Guardsman—a heavy feat.

Inside the Hive, Klbkch is a focused and strict ant. Despite his seemingly cold exterior, he protects his hive with pride. He is calculating in his actions, and is willing to cut any loose ends if it means getting his goals accomplished. For instance, he was ready to kill Pawn for learning about the existence of gods from Erin, and only relented from Pawn's pleading. On the flip side, his sense of duty and steadfast nature can act against him, causing him to either be cruel in demeanor. He also considers himself to be a cog in the machine, which lead to one of his many deaths.

10 years ago, Klbkch and his Hive came to Liscor,[4] hoping to find there a way to create Individuals and by extension stronger Antinium, who might allow them to defeat their ancient enemy that forced them to flee from their home in Rhir.

At one point he started to work for the City Watch as a [Guardsman], intending to improve the image of the Antinium in the city. Despite the bad reputation the Antinium usually have, he became a very respective member of the community. That is shown by him having managed to become a Senior Guardsmen[5], which means that at least 400 people had to have voted for him.

Before he was reborn he was the fourth-strongest Guardsman in Liscor [6] and also the fourth-highest-levelled.[7]

Klbkch views Erin as an irreplaceable asset to the Free Antinium due to her ability to create Individual Antinium and is willing to go out of his way or expend hive assets to protect her. However, he also believes Erin to be incapable of keeping secrets, and does not tell her the Antinium's history despite telling it to Ryoka. Klbkch becomes aware that Erin is from Earth, and keeps this information secret from his Queen. Erin's influence on Klbkch has made him more sentimental and appreciative of even regular Antinium.

Klbkch is Relc's partner, and is the only one able to deal with Relc's personality. Klbkch considers Relc to be his friend, but has no understanding of how they became friends. Despite this, Klbkch would attempt to kill Relc if his Queen ordered it.

Klbkch views Ryoka as trustworthy, intelligent, and capable of keeping secrets. He views her as an ally to Erin, and hence someone to be protected, but although he claimed that he cares little for Ryoka herself; primarily caring that she helps Erin. He told Ryoka of the waking God in Rhir; a secret he would be destroyed for sharing if the other Hives were aware he told anyone. And Ryoka's name was the first that came to his mind when Xrn asked if they had any allies among the other species. [9]

Klbkch is loyal to the Free Queen and shares a dream of creating individuals, working with other species, and reclaiming the Antinium's home with her. He prefers working with her towards these goals over working with the Antinium's Grand Queen, who is known to desire Klbkch as her Progenitor. Despite his loyalty to the Free Queen, Klb has a different perspective as a Prognugator and Revalantor. This leads him to keep secrets from his Queen, such as Erin's origins on Earth, in order to prevent a third antinium war and instead work productivly with other species. The Free Queen is considered the most progressive of the Antinium Queens and Klbkch is considered even more progressive than her.

Klbkch has a complex relationship with Ksmvr, the Antinium created to replace him after his death by Goblins. He does not approve of many of Ksmvr's decisions, such as the decision to withhold Antinium soldiers during Skinner's Attack on Liscor. After Ksmvr's exile from the dungeon, Klbkch maintains a frosty relationship with the former prognugator. However, from conversations with the queen, it appears that this is part of some larger plan.[10] It is implied that Ksmvr is allowed to adventure with the Horns in order to become more of an individual and develop skills and Skills to better serve the Antinium.

Pawn and the Individuals Edit

Klbkch's relationship with the individuals is awkward. He is unsure of how to deal with them; whether he ought to treat them as he does other Gaurdspeople in the watch or Antinium he can simply order about and expect to follow his orders. He defaults to treating them as typical workers and soldiers whom he expects to obey his every order without question, though he is slowly adapting. Erin calls this behavour towards Pawn and Yellow Splatters that of a "bad dad," though Klbkch angrily refutes the idea that his relationship with them is similar to that of a parent. 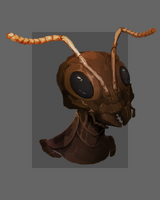 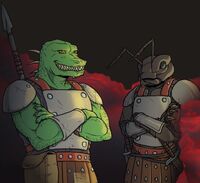 Relc and Klbkch by DemonicCriminal

Retrieved from "https://thewanderinginn.fandom.com/wiki/Klbkch?oldid=31797"
Community content is available under CC-BY-SA unless otherwise noted.