Chapter 1.30
Ksmvr was formerly the new Prognugator of Liscor's Antinium Hive. Now he is a member of the Horns of Hammerad.

Ksmvr had originally four arms, as he was created to look exactly as normal Antinium Workers. The lower right arm is now missing after his duel with Klbkch, of which only a jagged stump remains.[1]

needs to be written

Ksmvr had been created by the Free Queen and was then trained by Klbkch in the duties of a Prognugator for years, until he was prematuredly advanced to become a Prognugator himself.

Ksmvr was put in charge of his role as Prognugator after the death of Klbkch. Unlike his predecessor, Ksmvr didn't have any compassion, likely due to the rigorous training that Klbkch had him do. After some time of quietly organizing the Workers in the Hive, Ksmvr went after the Individuals that had by now surfaced among the Antinium, and believing them to be Aberrations, Ksmvr tortured Pawn until he could be convinced they were true individuals. He also intended to kidnap Erin and hold her captive in the hive, a plan that was prevented and abandoned however.

He made his most egregious tactical error during Skinner's Attack on Liscor, when he withheld all aid from the city in order to protect the Free Queen as she finished the Rite of Anastases to resurrect Klbkch. After Klbkch was alive again, he called Ksmvr a fool and took command as the new Revalantor of their hive, and eventually relieved Ksmvr of all his duties towards the Free Antinium.[1]

rest needs to be written

Within the Hive his strength is considered to be equal to a Silver-rank adventurer. 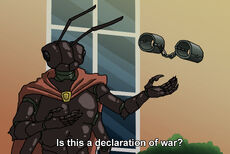 Ksmvr getting arrested by DemonicCriminal 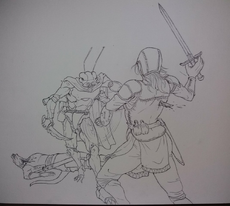 Ksmvr vs Bandits by DemonicCriminal

Retrieved from "https://thewanderinginn.fandom.com/wiki/Ksmvr?oldid=31550"
Community content is available under CC-BY-SA unless otherwise noted.