Chapter 1.31
Lyonette du Marquin was a royal [Princess] and sixth in line to the Eternal Throne of Calanfer. Although she is royalty, she was forced to resort to thievery in order to survive. After being caught by the Liscor Guard Watch, she was exiled, though saved by Erin Solstice, where she introduced herself as one of the Clavalettes, a member from a minor Noble House.

Lyon has a thin face, with bright red hair and bright blue eyes.[2] Her height is similar to that of a Worker's.[3] 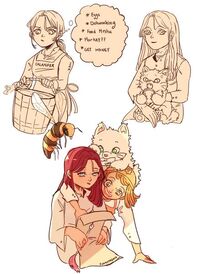 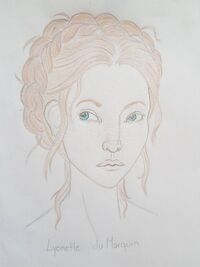 Retrieved from "https://thewanderinginn.fandom.com/wiki/Lyonette_du_Marquin?oldid=26372"
Community content is available under CC-BY-SA unless otherwise noted.