Despite not being particularly tall, she has a big presence.[3]

Lady Magnolia is a happy woman almost all of the time. That said, she is actually deliberately happy and good natured, because people like a happy person, therefore are more likely to lower their guards when talking to one.[4]

Magnolia has a preference towards the color pink. At least one of her rooms is pink[1], her dresses tend to be pink,[5] and even her carriage is frightfully pink. It was said that [Bandits] and other criminals can't even bear to attack the carriage because of the color.[6]

In their childhood, Magnolia was an extremely wild child, as her good childhood friend Ressa (who was just as bad) is always ready to remind her. Ressa would later be employed be Magnolia as her extremely skilled [Head Maid].[7] Magnolia already knew Teriarch when she was still a girl, thirty or forty years back if Teriarch's memory serves him right. They didn't lose contact when she became older, but she kept the secret of his existence secret.[8] Magnolia learned to play chess when she was sixteen and has been playing regularly with at least one good opponent since then.[3]

Magnolia was 18[9] when she participated in the First Antinium War after learning of the threat, together with Tyrion Veltras who didn't take the Antinium invasion as seriously as she.[10] She could assemble an army of 160,000 to deal with the incursion. As one of the foremost scion of her influential family, she had seized the power over her noble house from the other members of her family, in a coup that went unbloody. She then hired both masses of soldiers and every mid- and high-level adventurer available; she was present during the fighting that ended the Antinium Siege on Liscor; and she was acting as a buffer between Human and Drake commanders who frequently disagreed on key issues. However, she then returned back to the north and only participated in the war as a diplomat from then on.[11]

In the Second Antinium War, she participated in the Sacrifice of Roses, then participated in battles against [Goblin King] Velan with 100,000 soldiers, her Battle Golems and the Crown of Flowers.[12] She continued to provide powerful artifacts in the war against the goblins[13] and later linked up with Niers Astoragon who had ventured to Izril to help in the war as well[14] Still, for all her participation in wars, Reinhart had never bothered herself with assembling a staff to handle military matters, or learn the basics of these issues herself.[15]. Instead, she specialized in governing, ruling, economy and infrastructure.[16]

Magnolia was residing in her Celum mansion when Ryoka Griffin arrived. This was probably to be closer to Teriarch who had woken up shortly before that. Magnolia noticed the extraordinary young Runner and put quite some stress on the girl so that she could learn about her secrets. However, Ryoka eluded her inquiries repeatedly, even when Magnolia pressured her via the Runner's Guild, let the [Assassin] Theofore surveillance her and even let Teriarch scry the girl for her. While Volume 1 established her as a powerful main character and antagonist in Ryoka's storyline, the full extent of her influence was only revealed later.[18]

Magnolia found out about Earth when she picked up eight Earthworlders, among them Joseph, Rose and Imani.[19] She brought them to her Invrisil mansion where she also went when winter started.[20] She also invited Erin to there with intention of keeping her, but sent her back to Liscor when Erin refused to stay and made it believable to Magnolia that she would not be a negative influence on the [Lady's] schemes.[3]

It was then revealed that Magnolia is keeping tabs on all major players in Izril and the overall political situation, among them the Antinium Hives (she knew that the Grand Queen had sent a delegation to Liscor); the Goblin Lord and Goblin movements in general; the activities of Tyrion Veltras and Zel Shivertail. Her combat assets included 2000 people with levels above 20; 600 of them above 30; as well as 8 Gold-rank teams and 6 Named Adventurers; not to mention at least 350 irregular units. She was for a long time already trying to hire Niers Astoragon.[7]

Lady Magnolia's influence is so vast that at her word every garrison of every major city in the north would mobilize to back her if she so ordered.[21]

Her Skills as a [Lady] come with some restrictions. They won't work unless Magnolia is sufficiently ladylike. As a result, she may not, for instance, wear armor, not even on a battlefield, at least not if she wishes to make use of her Skills. That doesn't go for all [Ladies], however, as Bethal isn't so limited in that regard.[22] 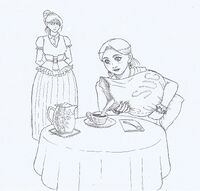 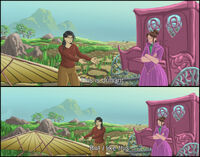 Retrieved from "https://thewanderinginn.fandom.com/wiki/Magnolia_Reinhart?oldid=28765"
Community content is available under CC-BY-SA unless otherwise noted.