The Wandering Inn Wiki
Register
Don't have an account?
Sign In
Advertisement
in: Characters, Humans, Chandrar,
and 4 more

Chapter 2.22 K
Mars, also known as Mars the Illusionist, is one of the Seven, and the Vanguard of Flos.

With the help of her magical items, Mars is capable of casting an illusion over her body, resulting in a drastic change of appearance. She has long, bouncing red curls of hair, very big breasts, a slender frame and unscarred skin. She carries a massive round shield, which is strapped to her back, and a sword at her hip.[1]

Without making use of her "trinkets", she has a shorter, thicker figure and flat chest, with pale skin, a face that is a bit plain with a few faint freckles, a nose that was a bit snubbed and brown hair. Moreover, she wears an armor that is grey, with a visor helmet on her head.[2]

Mars is boisterous and relaxed in manner. She is insecure about her own appearance, as she never shows it in public, and instead prefers to cast illusions to make herself look attractive. Otherwise, she is quite ostentatious. Mars is very confident in battle, and is always itching for a fight. Similar to the other members of the Seven, she is devoted to Flos.

Mars was once a [Gladiator] in Nerrhavia's Fallen's arenas.

Mars would be at the head of every charge, and crush the opposing army’s champion before each battle.[3]

Mars can't do any magic, although possesses numerous magical items.[1] She is a pure warrior, and an oustanding one at that. However, while it is true that she excels in combat, she is lacking in many other areas, making her rather inflexible. As a result, she is often employed only at specific times.[4] 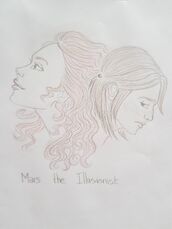