The Wandering Inn Wiki
Register
Don't have an account?
Sign In
Advertisement
in: Characters, Half-Giants, Mages,
and 6 more

Chapter 2.26
Moore is a half-Giant [Bloodearth Mage] and a member of the Halfseekers, a Gold-rank Adventurer team.

He is roughly 8-9 feet tall and wears patched clothing.[1]

Moore is the epitome of a gentle giant. He is a calm, pleasant person, though he is not used to people being nice to him and becomes flustered when he suddenly meets someone that is. While not easily angered, he can fly into a rage if his loved ones are hurt. Moore can be wistful for romantic companionship, and can be envious of other people's happiness. He is often self-conscious about his size, being too short for most half-Giants, and too tall for everyone else.

After the incident with Hectval, Moore's personality drastically changed, becoming more grim and less inclined to smile.[2] He also became more willing to use violence.

Moore is from Terandria. Shorter than his parents, he was left behind, supposedly out of "necessity."[3] At some point, he joined the Halfseekers. 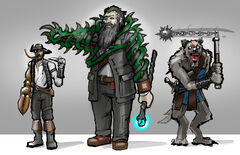 Seborn, Moore and Jelaqua by mg 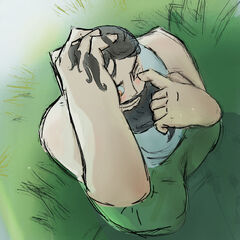 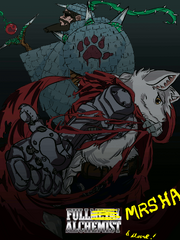 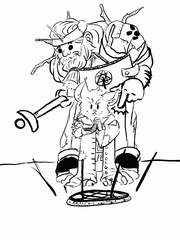