Chapter 2.28
Mrsha is a young mute Gnoll. She is the last survivor of the Stone Spears Tribe, and currently lives in the The Wandering Inn, with Erin and Lyonette as primary caretakers.

She has big, round eyes that were brown with gold strata mixed among the depth.[2] Although her fur is initially a 'colorful forest brown', it changes to become 'as white as snow' after her tribe's sacrifice.[3] This is a bad omen for Gnolls, as it usually symbolizes "those who lost their tribes; those who have survived calamity, and those who bring it".[4] This leads to Mrsha being ostracized by Brunkr and other Gnolls of Liscor.

Mrsha is 'insatiably curious' and loves the food in the Inn. She enjoys playing with Lyonette and stealing food from other customers. After becoming the last survivor of her tribe, Mrsha has had periods of feeling incredibly lonely and left out, to the extent that she ran away from those that were taking care of her.

Mrsha is a young Gnoll, born to two warriors in the Stone Spears Tribe.[5] She quickly bonds with Ryoka who passes through the tribe for Teriarch's delivery. Ryoka returns from her delivery to find the tribe in a panic, as Mrsha is now missing.[6] After Ryoka learns that the Frost Faeries know where Mrsha is, Urksh, leader of the Stone Spears, pledges "any price" to gain the knowledge of where Mrsha is, and the Frost Faeries lead Ryoka to discover Mrsha.

Mrsha is found in a crevasse in the mountaintop, having been chased there by a goblin. She is rescued by Ryoka, but encounters the Goblin army on their return to the tribe. Once again, Urksh makes a bargain with the Forst Faeries, to "offer everything" for the protection of Mrsha.[3] 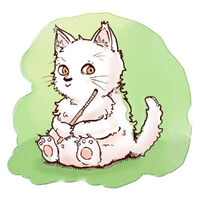 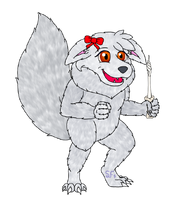 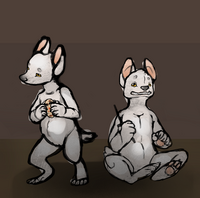 It's Adventure Time!! by Chalyon 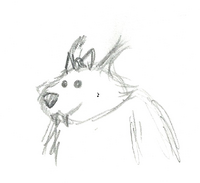 Retrieved from "https://thewanderinginn.fandom.com/wiki/Mrsha?oldid=29042"
Community content is available under CC-BY-SA unless otherwise noted.