The Wandering Inn Wiki
Register
Don't have an account?
Sign In
Advertisement
in: Characters, Humans, Blacksmiths,
and 4 more

Interlude - Flos
Nawalishifra Tannousin, or simply Nawal, is a member of the Tannousin Clansmen and a high-level [Blacksmith] capable of forging Naq-Alrama steel.

She is a young woman with dark skin and wears a veil.[1]

Nawal is prideful and prickly. She has a hierarchal mindset, acting haughty to those whom she perceives as inferior, while she kowtows to her social superiors. However, she possesses a true soul of a craftsperson and takes great pride in her work and clan.

After the Djinni attack, Nawal would refuse to talk with anyone like Teresa, and spent all her time by the anvil, swinging her hammer and making superlative blades of steel, even if her hands turn raw and bloody.[2] 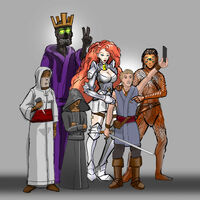