Chapter 2.18
Niers Astoragon, also known as The Titan of Baleros, or just The Titan, is the second in command of the Forgotten Wing Company, and the highest-leveled [Strategist] on Baleros, if not of the entire world.

Niers has a height of either six inches[1] or one foot[2]. He looks like any middle-aged man, with dark black, slightly grey hair, a powerful, if minuscule, build,[1] and a sharp beard.[3]

Queravia lost, and as she was laying on the ground, she laughed at Niers, laughed as her dice fell one last time and said something to Niers, before dying.[4]

He kept staring at the chess pieces, the letter, and then at the window, and told himself that he couldn’t leave, as he has a job and a duty as he is the second-in-command of his Company. So he kept staring back to the chessboard, waiting for his mystery player.[5]

While still in a bad mood, after reading and filing the report away, he had a curious sensation. He felt a subtle feeling, but he had trained himself not to ignore his instincts, and as it cried out to him as he opened the report and stared down at the name in ink, he could feel it. He knew it wasn’t a coincidence or a chance, but only the start. And that everything he had witnessed, all the little pieces, they were falling into place. That something was happening, and that the world would begin to move again. As he was thinking about this, behind him, on the chessboard, a piece slowly slid forwards and stopped.[7]

He tested this opponent with 2 different playing style and knew that this opponent was the true owner. He played with them all day until it was close to midnight. Before they stopped, his mysterious opponent sent him a simple message, from one lover of the game to the other, that they were sorry for leaving him alone all this time. Niers replied back that he knows that they were sorry, and forgives them.[6]

As the new strategy game Go swept across Baleros, he spent an outrageous sum of money commissioning an enchanted Go board, while playing his 37th game of Go in preparation for it reaching his unknown adversary in Liscor.[8]

They came to the conclusion that Liscor’s a place to watch after. And as he remember the past when they had cleared a dungeon like Liscor’s, he asked her if they could clear a dungeon like that again.[9]

A day after the battle at Liscor, he had one of his students and Wistram set up a broadcasts of himself in a mock battle, to be projected across the World.[10]

Niers has only one class and with it he can lead his army without any other skills. He can lead his armies to victory after victory, using his mind as a weapon. He can outmaneuver any foe, defeat any force, even those three times as large as his. With his Skills he can turn his soldiers into horrific monsters, yet if he needed to retreat his army would become ghosts on the battlefield. 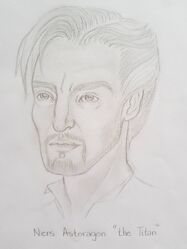 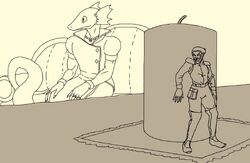 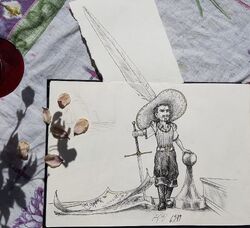 Retrieved from "https://thewanderinginn.fandom.com/wiki/Niers_Astoragon?oldid=31260"
Community content is available under CC-BY-SA unless otherwise noted.