The Wandering Inn Wiki
Register
Don't have an account?
Sign In
Advertisement
in: Characters, Humans, Empresses,
and 3 more

In war, she donned a mask of carved elephant bone and wielded a javelin.[2]

Despite her youth, she was generally thought to be as capable a leader as a warrior.[2]

While she had lots of bravado, she severely lacked political cunning, as was evidenced when she openly supported Flos as that seemed a simple question to her.[1]

She is noted by Femithain to be deceptively and dangerously intelligent, having lost board games against her despite being among the top 100 players in his nation. She is also very cunning, having managed to secretly learn the basics of golem crafting while skimming materials from Femithain's workshop.[3]

She grew up around her good friend Thef, who was a Grand Elephant and became her personal companion, along with Mezha.

She was a teen when Flos Reimarch conquered all of Chandrar.[4] Tiqr had allied itself with Flos in that time and was spared from his rampages. For that reason, she had a positive view of the King of Destruction.

She steered Tiqr into an isolated stance when she supported Flos' declaration of nonaggression at the Conference of Pomle. Since she had not formally allied with him, it lead to the demise of her entire realm as Nerrhavia, Savere, Illivere, Deimos, Xern, Lamult, Relaaquil and two other nations declared war on her country.

In that war, she lost the animal companion close to her, the Grand Elephant Thef.

She contacted Flos Reimarch in search for his aid, but he was reluctant to break his oath of non-aggression.

Having received threats from fellow ruler [Queen] Revine that she would be enslaved and tortured by Savere, and knowing that Nerrhavia's [Queen] Yisame wished to claim her as a trophy slave, Nsiia chose to capitulate towards Illivere, and was claimed by Femithain as spoils of war and defended against the two other [Queens].

Her [Wild General] Vasraf swore to continue the fight against the invaders and free Tiqr.

She now resides in Femithain's home in Illivere as a prisoner of war. In reality, she is more akin to a guest, taking full advantage of the luxuries Femithain's position affords her. She cannot leave his estates, and is guarded, both to make sure she does not escape and for her own protection.[3]

Tiqr’s heirloom's Magical Headband, decorated with birds feathers. It may or not be a variant of a wildform-type artifact. Once a feather is plucked it gives the wearer some magic from the bird it came from, for a moment (about less that 30 minutes).[2][7]

The Tiqr’s Tusk is the Tiqr’s heirloom's enchanted ivory Javelin. It has a fairly standard spear enchanted with recall, in which it flies back to the user, and piercing enchantments. It can also summon any elephant species in the region to the wearer’s aid.[2][7] 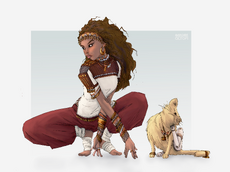 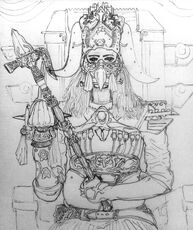 Nsiia, in her regal outfit as [Empress of Beast], by Fionn Clissman 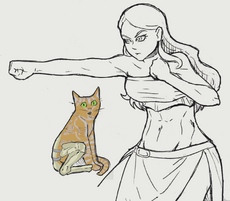 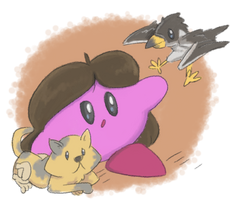