Oldblood Drakes, is a term referring to Drakes born with more of their ancestor’s blood in their veins, manifesting Draconic traits such as wings or a breath attack. For those who bore the rarest of their ancestor’s heritage, they are known as True Oldblood.[1]

Less than one in a thousand Drakes manifest a hint of their ancestry. Any family could give birth to someone with the old blood, but families with pure bloodlines that went back to the dawn of the Drake species were far more likely to have a child with the old blood. Such individuals are cherished, and the families often given money and aid for simply raising them, as there is prestige in being of the old blood. It is ease for them to get a job in any position, and in some circles having a drop of the old blood was as good, if not better, as a noble title.[2]

While Oldblood Drakes can have fully fledged wings, others have vestigial stumps, or half-formed wings. There is a magical component to flying, as Drakes are usually too heavy to fly normally. Each wingbeat depletes the magic in their wings, so they are unable to go far distances, unless they sustain their flight with magic.[2] Those with half-formed or vestigial wings are unable to get off the ground.[3]

There are a wide variety of breath attacks including fire, frost, lightning, or darkness. However, it can be both blessing and curse Some Drakes grow faint of breath when they used their breath attacks or injured their own throats.[2] Others would feel as though they are suffocating, and can only use their breath weapon a couple of times before they would asphyxiate.

They are able to pool their breath attacks together. They can also do this with Wyvern variants possessing breath attacks, even if they are of a different element.[4]

Those whose dragonbreath goes out of control are called Scorchlings, or Frostlings.[5]

For those who's heritage are true though, they could use both their wings and breath attack without issues.[2] 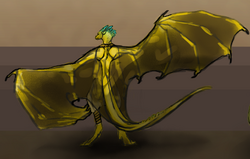