Chapter 6.15 K
Orjin is the Strongest of Pomle, as well as its ruler.

He is a male person with dark skin, tall and heavy from muscle, not fat. He is hardened enough to not feel the ground's heat below his bare feet, and he doesn't sweat much.

He dresses up for occasions with a bright, colored cotton skirt that a traveling merchant gifted him once, and a hide cape of an animal or monster.[1]

He likes to train his balance standing or handstanding on rock piles.[1]

Orjin is the Strongest of Pomle since eight years, as of book 6.[1]

He oversaw the Conference of Pomle as a host. He managed to intimidate all leaders present so that there no open violence broke out, except for an altercation where he single-handedly stopped both [Beast-Empress] Nsiia and [Hydromancer]-[Queen] Revine as they attacked each other.[1]

During the war against Tiqr, he declared again the neutrality of Pomle and fought off a night-attack of Saverian [Rogues] and [Pirates], together with other warriors of Pomle.[2] 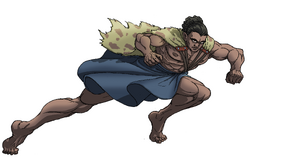 Retrieved from "https://thewanderinginn.fandom.com/wiki/Orjin?oldid=25046"
Community content is available under CC-BY-SA unless otherwise noted.