The Wandering Inn Wiki
Register
Don't have an account?
Sign In
Advertisement
in: Locations, Cities, Walled Cities,
and 2 more

Oteslia, also known as the City of Growth, is one of the Walled Cities of Izril.

Oteslia is famous for having the best agricultural products in Izril's south.[1][2] They have excellent animal breeds, rich harvests, the best [Gardeners] and a great knowledge when it comes to growing plants, even plants from all around the world.[3] This fame also extends to Oteslian [Chefs] and their cooking.[4]

Oteslia is also host to one of the biggest [Druid] Circle in Izril.[5]

Only in comparison with the other five Walled Cities who are even richer, Oteslia is considered to be lacking financial resources.

At one time Oteslia fought off 6 Adult-Stage Crelers. Manus’ reported on the battle claiming that if two Elder Crelers had attacked the city, it might have fallen.[6]

Two centuries ago, General Ironscales from Oteslia lost the Heartflame Breastplate in a battle against Humans.[7]

In the time of the storylines of books 5 and 6, Oteslia fights in a dispute with Zeres. Supported by the Liscorian Army, Oteslia was besieging the other Walled City.[8] That "defense contract" was concluded as the Election in Liscor happened.[9]

Oteslia and Salazsar were the staunchest supporters of Liscor in the dispute of the Walled Cities whether or not to answer Liscor's call for help against the human/goblin invasion of Tyrion Veltras/Reiss.[10] Oteslia then committed its Winged Raiders, which didn't arrive in Liscor in a state ready to fight,[11] after forced marching of six days.

A conference is planned in Oteslia, that involves both Navine Gemscale[12] and Magnolia Reinhart.[13]

Oteslia has the highest Gnoll-to-Drake ratio of all the Walled Cities. The city is governed by a "Grand Gardener", who saw fit to declare war on Belchan in Chandrar after several Gnoll Tribes had been slaughtered there. As both nations are landlocked on their respective continentes, that declaration of war is symbolic.[14]

Oteslia is known to be the weakest of all Walled Cities when it comes to pure military strength. Word from Manus is that Oteslia is waiting to be burnt, even.[15] However, they have elite groups, among them the Winged Riders, an Oldblood Batallion who can lift their horses mid-run into the air. At least one of the riders in each company also rides a Pegasus, which are incredibly rare animals and currently only bred in Oteslia.[16]

The Oteslian battle standard shows a view of the Walled City, and a huge tree in the background. Their colors are white and bright green.[16] 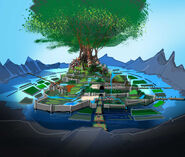 Impression of Oteslia, city of growth
by mg