Chapter 2.27 G
Pyrite was the former Chieftain of the Gold Stone Tribe and the second-in-command of the Flooded Waters Tribe.

Pyrite is a large hob with multiple layers of fat protecting him.

Pyrite avoids conflict unless absolutely necessary but is willing to be vicious if it means survival. Pyrite is willing to make himself an object of ridicule to defuse a violent situation and is especially protective of goblin children.

Pyrite once lived in the Mountain City Tribe, but left at one point because he felt very uncomfortable living there due to the custom of taking human women as sexual prisoners.

During his time at the Mountain City Tribe, Pyrite was mentored by the [Goblin Lord] Greydath of Blades, but wasn't able to pass Greydath's "basic" training. He did manage, however, learn how to anticipate where and when an opponent is going to hit.

As [Mining Chieftain] of the Goldstone Tribe, Pyrite avoided violence as much as possible. He hid away from humans, cultivated an interest in rocks, and kept from massacring the occasional Bronze and Silver rank team to avoid attention. He kept to mining gemstones and gave most of them away to the children of his tribe.

Eventually, the Flooded Waters Tribe conquered the Goldstone Tribe and assimilated Pyrite and his Goblins into the tribe. 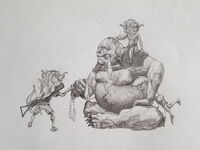 Retrieved from "https://thewanderinginn.fandom.com/wiki/Pyrite?oldid=23676"
Community content is available under CC-BY-SA unless otherwise noted.